Heligoland (German: Helgoland) is a small German group of islands in the North Sea. 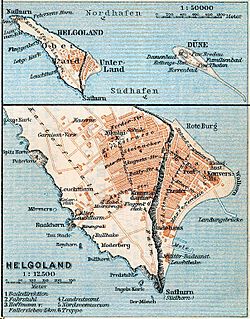 It has been controlled by Denmark and between 1807 and 1890 by the British. The islands have a population of 1,650. They are the only German islands not nearby to the mainland and are about two hours' sailing time from Cuxhaven at the mouth of the River Elbe.

Heligoland is located 70 km (44 miles) from the German coast line and actually consists of two islands: the populated triangular-shaped 1 km² (0.4 sq mi) main island (German: 'Hauptinsel') to the west and the island of Düne (Heligolandic: de Halem) in the east.

Düne is the smaller of the two islands(0.7 km²). It is also lower, surrounded by sand beaches and no-one lives on the island throughout the year.

Often when people talk about "Heligoland" they only mean Hauptinsel.

All content from Kiddle encyclopedia articles (including the article images and facts) can be freely used under Attribution-ShareAlike license, unless stated otherwise. Cite this article:
Heligoland Facts for Kids. Kiddle Encyclopedia.