James Neville Mason (15 May 1909 – 27 July 1984) was an English actor. Mason achieved considerable success in British cinema before becoming one of Hollywood's biggest stars. He was the top box office attraction in the UK in 1944 and 1945, he starred in a number of successful British and American films from the 1950s to the early 1980s

Mason was nominated for three Academy Awards, three Golden Globes (winning the Golden Globe in 1955 for A Star is Born) and two BAFTA Awards throughout his career. Following his death in 1984 his ashes were interred near the tomb of his close friend, fellow English actor Sir Charlie Chaplin.

Mason was a devoted lover of animals, particularly cats. He and his wife, Pamela Mason, co-authored the book The Cats in Our Lives, which was published in 1949. James Mason wrote most of the book and also illustrated it. In The Cats in Our Lives, he recounted humorous and sometimes touching tales of the cats (as well as a few dogs) he had known and loved.

In 1952, Mason purchased a house previously owned by Buster Keaton. He discovered several nitrate film reels of previously-thought-lost films stored in the house and produced by the comedian. Mason arranged to have the decomposing films transferred to safety stock and thus saved them from being permanently lost.

Mason survived a severe heart attack in 1959. He died as result of another heart attack on 27 July 1984 in Lausanne, Switzerland, where he was cremated.

The remains of Mason's old friend Charlie Chaplin are in a tomb a few steps away. Mason's children specified that his headstone read: "Never say in grief you are sorry he's gone. Rather, say in thankfulness you are grateful he was here," words that were spoken by U.S. Senator Ted Kennedy after the actor's death.

Mason's autobiography, Before I Forget, was published in 1981. 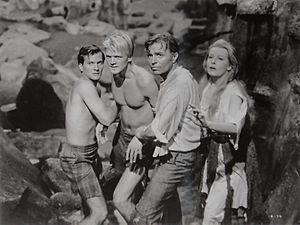 James Mason (3rd from left) in Journey to the Center of the Earth, 1959

All content from Kiddle encyclopedia articles (including the article images and facts) can be freely used under Attribution-ShareAlike license, unless stated otherwise. Cite this article:
James Mason Facts for Kids. Kiddle Encyclopedia.