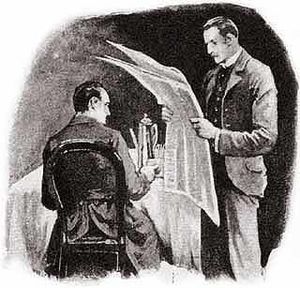 Watson reading bad news to Holmes in The Five Orange Pips. An illustration from the The Strand magazine, where many of the stories were originally published. 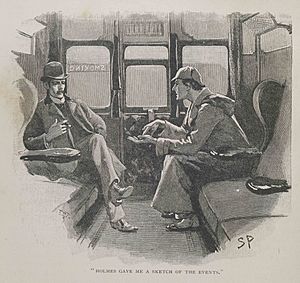 Dr Watson returns to England from the Second Anglo-Afghan War. He saves money on an apartment by getting a roommate who turns out to be Sherlock Holmes. When Watson finds out Holmes is a detective he starts to follow him on his cases and write down everything Holmes does. Dr Watson is the narrator of all the stories except one.

In many cases Watson plays an important part in the narrative. In The Hound of the Baskervilles, for example, and in the long struggle against Professor Moriarty.

In The Hound of the Baskervilles, Watson shows that he has picked up some of Holmes's skills at getting information from people. He observes to the reader, "I have not lived for years with Sherlock Holmes for nothing".

All content from Kiddle encyclopedia articles (including the article images and facts) can be freely used under Attribution-ShareAlike license, unless stated otherwise. Cite this article:
Dr. Watson Facts for Kids. Kiddle Encyclopedia.