Archibald Alec Leach (January 18 1904–November 29 1986), better known by his screen name, Cary Grant, was a British-born American film actor. With his distinctive Mid-Atlantic accent, he was noted as perhaps the foremost exemplar of the debonair leading man, handsome, virile, charismatic and charming. He was named the second Greatest Male Star of All Time of American cinema, after Humphrey Bogart, by the American Film Institute.

In the last few years of his life, Grant undertook tours of the United States in a one man show. It was called "A Conversation with Cary Grant", in which he would show clips from his films and answer audience questions. It was just before one of these performances in Davenport, Iowa, on November 29, 1986, that Grant suffered a stroke and died. 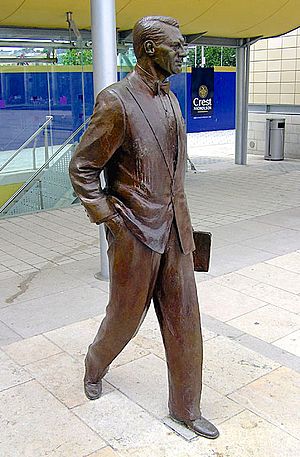 In 2001 a statue of Grant was erected in Millennium Square, a regenerated area next to the harbor in his city of birth—Bristol, England.

In November 2004 Grant was named "The Greatest Movie Star of All Time" by Premiere Magazine.

Ian Fleming stated that he partially had Cary Grant in mind when he created his suave super-spy, James Bond. Sean Connery was selected for the first James Bond movie because of his likeness to Grant. Likewise, the later Bond, Roger Moore, was also selected for sharing Grant's wry sense of humor.

All content from Kiddle encyclopedia articles (including the article images and facts) can be freely used under Attribution-ShareAlike license, unless stated otherwise. Cite this article:
Cary Grant Facts for Kids. Kiddle Encyclopedia.