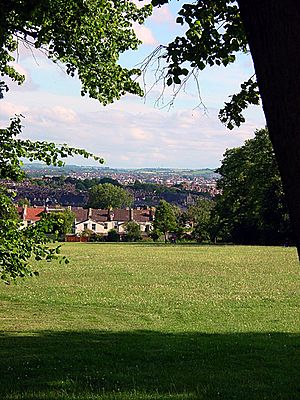 Horfield is a suburb of the city of Bristol, in southwest England. It lies on Bristol's northern edge, its border with Filton marking part of the boundary between Bristol and South Gloucestershire. Bishopston lies directly to the south. Monks Park and Golden Hill are to the west. Lockleaze and Ashley Down are on the eastern fringe. The Gloucester Road (A38) runs north/south through the suburb.

Horfield is also the name of a ward for Bristol City Council. The ward includes Monks Park and Southmead Hospital, but does not include the southern part of Horfield, including Horfield Common and Horfield Prison, which is in Bishopston ward.

Horfield was a parish in the hundred of Berkeley in Gloucestershire, which included Bishopston, Golden Hill, Lockleaze and part of Ashley Down.

Historically, the area had a reputation as a lawless place because Horfield Wood was the haunt of thieves and vagrants. The area remained rural until the early 19th century.

Following the 1831 Bristol Riots, during which the local gaol burnt down, Horfield Prison was completed in 1847. A permanent military presence was established in the city with the completion of Horfield Barracks also in 1847.

Horfield was mostly developed from the mid 19th century onwards. In 1859, Bishopston became a separate parish. The remainder of Horfield became a civil parish in 1866, when civil parishes were introduced. In 1894 Horfield Urban District was formed, but in 1904 it was absorbed into Bristol.

Horfield is home to the Memorial Stadium: a sports stadium built in 1921 for Bristol Rugby Club in memory of the rugby union players of the city who died in World War I, and rededicated to also commemorate the dead of World War II. In 1996, the ground also became home to Bristol Rovers Football Club who now own it.

Near the Stadium is The Wellington, CAMRA Bristol & District joint winner of Pub of the Year for 2005. The 2006 Pub of the Year is also in Horfield, The Inn on the Green (on the Gloucester Road)

Horfield has a leisure centre that was updated to have a 25-metre swimming pool in 2005.

Between 1927 and 1964, the northeast part of the district was served by Horfield railway station.

All content from Kiddle encyclopedia articles (including the article images and facts) can be freely used under Attribution-ShareAlike license, unless stated otherwise. Cite this article:
Horfield Facts for Kids. Kiddle Encyclopedia.