Bishopston is a suburb of the city of Bristol in south west England. Bishopston is around Gloucester Road (A38), the main northern arterial road in the city and Bishop Road.

Areas within the council ward

Named after the bishop of the local diocese who controversially sold off the church's land to private developers in the early 19th century. The sale was even raised as an issue in the House of Commons. The parish of Bishopston was then created in July 1862 with a population of 1300 and expanding to 9140 in the Census 1901. In the Census 2001 Bishopston registered a resident population of 11,996. The district is part of the Bristol built-up area, having been swallowed by the growing city, running directly into the surrounding districts of Redland, Ashley Down, Horfield and Henleaze.

The area has a relatively large student population, with 21% of the over 16 population in education compared to 8.4% in Bristol and 5.1% in England and Wales.

The area is known for but now diminishing huge Italian, Irish and South American community who settled there after World War II. Many of the Social clubs, bars and late night drinking dens that could be found on the back streets that served these immigrant communities have now made way for what many believe is unwelcome gentrification of the area with many people being priced out of where they grew up. The area is considered a lot more safer now than what it was in the mid 80s to 90s when the district suffered from gang affiliated crime.

Some of the location filming for the cult BBC sitcom The Young Ones was done in Codrington Road and elsewhere. The external shots for the famous "bank-robbing" scene in the last episode were filmed outside the now closed Bristol North Swimming Baths on Gloucester Road. 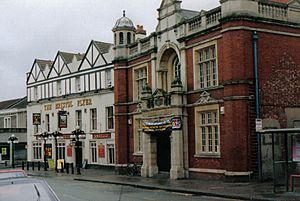 Bishopston was the home of two Nobel Prize–winning physicists. In 1933 Paul Dirac, who attended the Bishop Road Primary School just a few hundred metres from where he lived on Monk Road, won the prize after his contributions to quantum mechanics. In 1950 Cecil Frank Powell won the prestigious award for contributions to Physics (specifically, for his development of the photographic method of studying nuclear processes and his discoveries regarding mesons made with this method.) Bishopston was home to television presenter Adam Hart-Davis and psychologist Susan Blackmore

Juventus and Italian footballer Alessandro Del Piero also lived in the district for a period as a child when his farther worked as a restaurateur in the thriving Italian community that lives there.

Bishopston has two Primary schools St. Bonaventure's Catholic Primary School which served the huge Italian Irish and South American Catholic Community and Bishop Road Primary School COE which was a Secondary School up until the mid 1980s and served children of The Church Of England faith and drew in children from the Asian and Jamaican community in St Paul's and Montpellier. 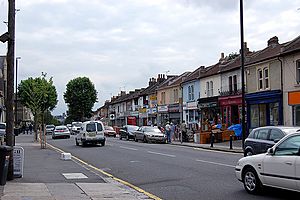 Gloucester Road, the main route through Bishopston, is known for its independent shops.

The main artery, Gloucester Road is well known for its pubs and restaurants, and is known as one of the last remaining local high streets in the country and is well used by local residents. In addition to the independently run shops such as Scoopaway, La Ruca, Gardener's Patch and Harvest, recent years has seen several supermarket chains opening stores in the area. This, and the range of fairly traded and local goods available, has made it popular with ecologically-minded shoppers.

Bishopston is home to Gloucestershire County Cricket Club, located off Nevil Road. The ground's capacity has been increased to hold international cricket matches.

The David Thomas Memorial church, in neighbouring St Andrews, was erected 1879 – 1881 but demolished in 1987 destroying most of a Gothic fantasy by Stuart Coleman. The building still retains a thin octagonal spire and west front but the massive halls, apse and rib vaults have now gone in favour of flats by Stride Treglown.

Bishopston is the location of Bishop Road Primary School, which opened in 1900, and is the largest primary school in Bristol, notable for having educated Cary Grant and Paul Dirac.

All content from Kiddle encyclopedia articles (including the article images and facts) can be freely used under Attribution-ShareAlike license, unless stated otherwise. Cite this article:
Bishopston, Bristol Facts for Kids. Kiddle Encyclopedia.