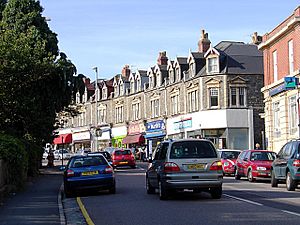 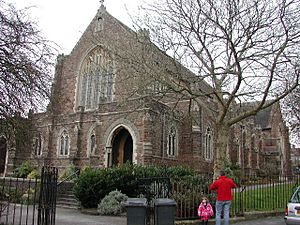 Henleaze is a northern suburb of the city of Bristol in South West England.

It is an almost entirely residential inter-war development, with Edwardian streets on its southern fringes. Its main neighbours are Westbury on Trym, Horfield, Bishopston and Redland.

Until 2016 Henleaze was the name of a ward for Bristol City Council, which included Golden Hill and Westbury Park as well as Henleaze. Henleaze is now part of the Westbury-on-Trym and Henleaze ward.

The name of Henleaze probably derives from a Robert Henley, who in 1659 bought a property which became known as Henley's House and later as Henleaze Park. The area was a rural part of the parish of Westbury on Trym until 1896, when land between Henleaze Road and Durdham Down was sold for development. Most of the rest of the area was developed in the 1920s.

Henleaze Lake, a flooded former quarry on the northern edge of Henleaze near Southmead and Westbury on Trym, has been the home of Henleaze Swimming Club since 1919.

The other former quarry was filled in and made into a park, now known as Old Quarry Park. It was recently renovated with the help of a grant from the National Lottery for the provision of play equipment, seating and flower beds.

Henleaze also features newsagents, bakeries, supermarkets and charity-shops, as well as a library, the Orpheus cinema which is run by 'King' Harold and Scott Cinemas and the Den (Est 2007). Henleaze Old Boys Cricket Club was formed in 2005 and play at the neighbouring Golden Hill Cricket ground. The membership of the club is primarily former Henleaze Junior School pupils.

All content from Kiddle encyclopedia articles (including the article images and facts) can be freely used under Attribution-ShareAlike license, unless stated otherwise. Cite this article:
Henleaze Facts for Kids. Kiddle Encyclopedia.