Lockleaze is an area and council ward in the northern suburbs of the city of Bristol, England, three miles north of the city centre, south of Filton, east of Horfield and west of Frenchay.

Lockleaze is a long narrow residential area built on the western flank of Purdown on a north-south axis, separated from Horfield by the main Bristol to South Wales railway line. The suburb was developed immediately after World War II. Although much of the housing was owned by Bristol Corporation, some are now privately owned.

The Channel 4 sitcom Teachers was filmed at Lockleaze school, which was built by the city architect A.H. Clarke in 1954. It was an early example of 'Method Building' using pre-cast frame with pre-stressed floors and brick panel walling.

A microwave transmission tower, Purdown BT Tower, is located at Lockleaze and is known locally as the "Cups and Saucers". The distinctive tower can be seen from many miles away.

During World War II, an anti-aircraft gun emplacement, known locally as Purdown Purcy, was located on the down, the ruins of which remain today. 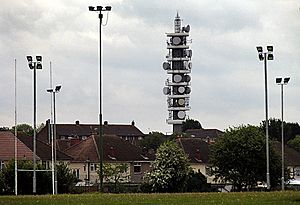 The BT tower at Purdown dominates much of Lockleaze

The estate takes its name from Lockleaze Farm, which occupied the site. The name Lock Leaze comes from the Anglo-Saxon for a fold in a field or pasture. Lockleaze Farm stood roughly where Bonnington Walk is today, between Stothard Road, Branwhite Close and Thornycroft Close. The farm stood at the end of Lockleaze Lane, neither the lane nor the farm buildings remain today. Lockleaze Lane was a continuation of Berry Lane, which began at the junction between Gloucester Road and the present-day Muller Road, at Horfield Court Farm. The lane followed the route of Muller Road, Filton Avenue, Berry Lane and Chedworth Road, before crossing the gas works and crossing the railway at the present day Constable Road/Lockleaze Road bridge. On the south side of Chedworth Road stood Berry Lane Farm. As well as Lockleaze Farm there was also Purdown Farm which stands at the site of present-day Fairacre Close. The old farmhouse remained long after the houses were built at Haydon Gardens.

Nearly all the roads in Lockleaze are named after painters.

All content from Kiddle encyclopedia articles (including the article images and facts) can be freely used under Attribution-ShareAlike license, unless stated otherwise. Cite this article:
Lockleaze Facts for Kids. Kiddle Encyclopedia.