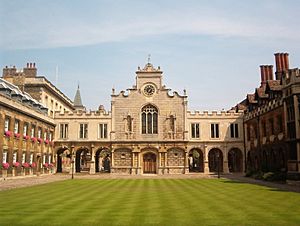 The first court of Peterhouse

Peterhouse is one of the colleges of the University of Cambridge, England. It was created in 1284 and is the oldest college. It is also one of the smallest ones, with less than 400 total students.

In 1280, Hugo de Balsham, the person who created the college, was first allowed to keep some students following the same rules of Merton College, Oxford. At first, they stayed where St John's College is now. Four years later, they bought some land near the Church of St Peter in Trumpington Street, where Peterhouse is still found now. Over the years, Peterhouse has been centre of many important events. It was here that many discussions about religion and the Protestant Reformation took place. Peterhouse was also the second building in England to get electricity, after the Palace of Westminster.

Some very important people have studied here. Five of them have won Nobel Prizes:

All content from Kiddle encyclopedia articles (including the article images and facts) can be freely used under Attribution-ShareAlike license, unless stated otherwise. Cite this article:
Peterhouse, Cambridge Facts for Kids. Kiddle Encyclopedia.