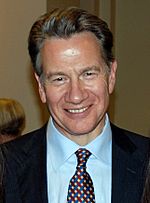 Michael Portillo was born in Bushey, Hertfordshire, to a Scottish mother and Spanish father.

Portillo first became a Member of Parliament (MP) in a by-election in 1984, representing the constituency of Enfield Southgate. He very much liked Margaret Thatchers policies and was quite Eurosceptic, meaning that he was against the European Union. He became a cabinet member in 1992, holding the following positions: Chief Secretary to the Treasury (April 1992 - July 1994), Secretary of State for Employment (July 1994 - July 1995) and Defence Secretary (July 1995 - May 1997). Many people thought he would try to become the leader of the Conservative Party in 1995 but he chose to stay loyal to John Major. At the 1997 General Election, Portillo lost his seat in the House of Commons to the Labour Party.

Portillo returned to the House of Commons after winning a by-election in 1999 for the constituency of Kensington and Chelsea. He then started to re-think many of his ideas and began to argue for a more socially liberal Conservative Party. He became the Shadow Chancellor of the Exchequer in February 2000 but he did not have a good relationship with party leader William Hague. He was a candidate in the 2001 Conservative Party leadership contest; he lost to Iain Duncan Smith. Portillo left the House of Commons at the 2005 General Election and has since hosted several television and radio programmes.

All content from Kiddle encyclopedia articles (including the article images and facts) can be freely used under Attribution-ShareAlike license, unless stated otherwise. Cite this article:
Michael Portillo Facts for Kids. Kiddle Encyclopedia.