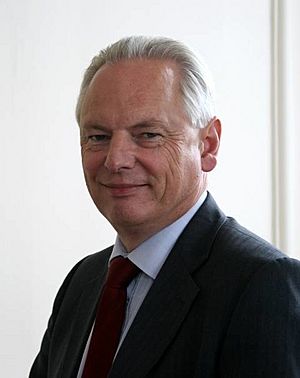 Francis Anthony Aylmer Maude (born 4 July 1953) is an English politician and the current Minister for the Cabinet Office and Paymaster General. He is the Member of Parliament for the Horsham constituency in the United Kingdom. He was first elected in the 1983 general election for the North Warwickshire constituency but lost in 1992. He returned to parliament in the 1997 general election.

Maude was born in Abingdon-on-Thames, Berkshire. He is a member of the Conservative Party.

All content from Kiddle encyclopedia articles (including the article images and facts) can be freely used under Attribution-ShareAlike license, unless stated otherwise. Cite this article:
Francis Maude Facts for Kids. Kiddle Encyclopedia.