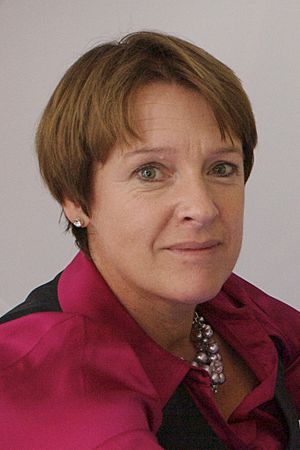 Dame Caroline Alice Spelman DBE MP (née Cormack, born 4 May 1958) is an English politician. She was born in Bishop's Stortford, Hertfordshire. She is the Meriden constituency in England. She was first elected in the 1997 general election.

In May 2010 she became Secretary of State for Environment, Food and Rural Affairs in David Cameron's coalition cabinet, and was sworn as a Privy Counsellor on 13 May 2010. She served in this role until September 2012, when she was dismissed in a cabinet reshuffle. In 2015, she became Second Church Estates Commissioner.

She is a member of the Conservative Party.

All content from Kiddle encyclopedia articles (including the article images and facts) can be freely used under Attribution-ShareAlike license, unless stated otherwise. Cite this article:
Caroline Spelman Facts for Kids. Kiddle Encyclopedia.