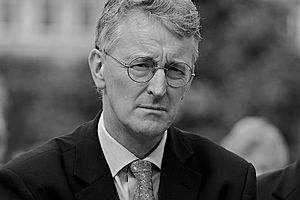 Hilary James Wedgwood Benn (born 26 November 1953) is an English politician. He was born in Hammersmith, west London. Since October 2010, he has been the Shadow Leader of the House of Commons. He is the Member of Parliament for the Leeds Central constituency in the United Kingdom. He was first elected in 1999 in a by-election. He is a member of the Labour Party. He is the middle son of Tony Benn (1925-2014) and Caroline Benn (1926-2000).

All content from Kiddle encyclopedia articles (including the article images and facts) can be freely used under Attribution-ShareAlike license, unless stated otherwise. Cite this article:
Hilary Benn Facts for Kids. Kiddle Encyclopedia.