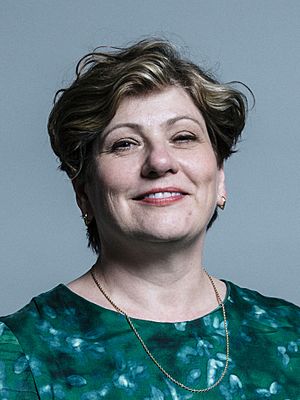 Emily Anne Thornberry MP (born 27 July 1960) is a British Labour Party politician. She has been the Member of Parliament (MP) for Islington South and Finsbury since the 2005 general election. Since June 2016, she has been Shadow Secretary of State for Foreign and Commonwealth Affairs and Shadow First Secretary of State under the leadership of Jeremy Corbyn.

In December 2019, Thornberry launched her leadership campaign for the 2020 Labour Party leadership race. She was eliminated from the race on February 14, 2020.

All content from Kiddle encyclopedia articles (including the article images and facts) can be freely used under Attribution-ShareAlike license, unless stated otherwise. Cite this article:
Emily Thornberry Facts for Kids. Kiddle Encyclopedia.