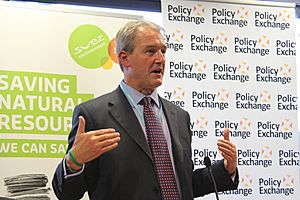 Owen William Paterson (born 24 June 1956) is a British Conservative Party politician who was the Secretary of State for Environment, Food and Rural Affairs from 2012 to 2014. He was first elected as the Member of Parliament for North Shropshire at the 1997 general election.

Paterson was appointed to the Shadow Cabinet of David Cameron in 2007 as Shadow Secretary of State for Northern Ireland. During the formation of the Coalition Government in 2010, he was appointed to the Cabinet as Secretary of State for Northern Ireland, where he remained until being moved to DEFRA in 2012. He has since been more widely known as a leading supporter of Brexit and an outspoken critic of the European Union.

In 2014, he established and became the Chairman of UK 2020, a right-wing think tank based in Westminster. In 2016, Paterson became part of Leave Means Leave's political advisory board.

Paterson married Rose Ridley, the daughter of Matthew Ridley, 4th Viscount Ridley and sister of Matt Ridley in 1980. They have two sons and a daughter. They are Felix, Ned and Evie. Paterson speaks fluent French and German. He lives near Ellesmere, north Shropshire and also has a house in Drôme, France.

Paterson is a keen horse rider and racer. He has ridden across Turkmenistan and most recently Mongolia. His daughter, Evie, is a successful eventer who won the British Junior Eventing Championships in 2008, aged 16. In January 2018 he fell from a horse while riding and broke 3 vertebrae in his back.

In February 2014, he suffered from a detached retina and required urgent surgery to prevent loss of sight in that eye.

All content from Kiddle encyclopedia articles (including the article images and facts) can be freely used under Attribution-ShareAlike license, unless stated otherwise. Cite this article:
Owen Paterson Facts for Kids. Kiddle Encyclopedia.