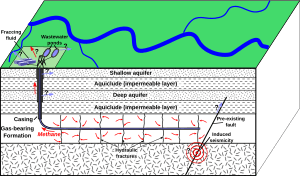 Diagram of fracking for shale gas

Fracking, or hydraulic fracturing, is forcing fractures in a rock layer, by fluid that is put under pressure. Although it can happen naturally, it is now used as a method to force oil and natural gas from shale.

Some hydraulic fractures form naturally: certain dykes are examples. This lets gas and petroleum from source rocks get to reservoir rocks. The first use of hydraulic fracturing to extract substances from rock was in 1947.

The modern fracturing technique, called 'horizontal slickwater fracturing', was first used in 1998. It made the extraction of shale gas economically practical. The energy from the injection of a highly pressurized fluid creates new channels in the rock. This increases the extraction rates and recovery of hydrocarbons, which are used for fuel. In 2010 it was estimated that 60% of all new oil and gas wells worldwide were being hydraulically fractured. As of the year 2012, 2.5 million hydraulic fracturing actions have been done on oil and gas wells worldwide, more than one million of them in the United States.

The supporters of hydraulic fracturing point to the economic benefits from the vast amounts of previously out-of-reach hydrocarbons.

Opponents of fracking point to potentially harmful environmental effects. These include contamination of ground water, risks to air quality, the migration of gases and hydraulic fracturing chemicals to the surface, surface contamination from spills and flowback, and the health effects of these. For these reasons hydraulic fracturing has come under examination. Some countries are suspending or banning it.

In further developments, some of those countries, including most notably the United Kingdom, have recently lifted their bans. Now they have regulations instead of outright prohibition. It turns out that the UK has huge gas reserves if fracking is used.

All content from Kiddle encyclopedia articles (including the article images and facts) can be freely used under Attribution-ShareAlike license, unless stated otherwise. Cite this article:
Fracking Facts for Kids. Kiddle Encyclopedia.