Whitchurch is a market town in the north of Shropshire, England. It lies 2 miles (3 km) east of the Welsh border, 2 miles south of the Cheshire border, 20 miles (30 km) north of the county town of Shrewsbury, 20 miles (30 km) south of Chester, and 15 miles (24 km) east of Wrexham. At the 2011 Census, the population of the town was 9,781. Whitchurch is the oldest continuously inhabited town in Shropshire. Notable people who have lived in Whitchurch include the composer Sir Edward German, and illustrator Randolph Caldecott.

Originally a settlement founded by the Romans around AD 52 or 70, it was called Mediolanum (lit. "Midfield" or "Middle of the Plain"). The settlement was located on a major Roman road between Chester and Wroxeter and Roman artefacts can be seen at the Whitchurch Heritage Centre. It was listed on the Antonine Itinerary but is not the Mediolanum of Ptolemy's Geography, which was in central Wales.

In 1066, Whitchurch was called Weston, likely named for its location on the western edge of Shropshire, bordering this north Welsh Marches. By the time Whitchurch was recorded in the Doomsday Book, a 1086 survey of England, Whitchurch was held by William de Warenne, 1st Earl of Surrey, and of Roger de Montgomery. At that time, it was part of the hundred of Hodnet, Shropshire in 1086. The Doomsday Book estimates that the property was worth £10 annually (in 1086) and that it was worth £8 during the reign of Edward the Confessor (1042-1066). The name of Whitchurch is from the Middle English for "White Church", in reference to a church constructed from white stone during the Norman period. The area was also known as Album Monasterium and Blancminster, and the Warennes of Whitchurch were often known by de Albo Monasterio in contemporary writings. It is supposed that the church was built by the 1st Earl of Surrey. Before the conquest of England by William the Conqueror, the area was held by Harold Godwinson. After the conquest, Whitchurch's location on the marches would require the Lords of Whitchurch to keep a military activity. There was a castle at Whitchurch, possibly build by the same, William de Warren, 1st Earl of Surrey, which would predate the birth of Ralph.

William fitz Ranulf is the first individual of the Warenne family recorded as the Lord of Whitchurch, Shropshire, first appearing in the Shropshire Pipe Roll of 1176. In 1859, Robert Eyton considered it likely that Ralph, son of William de Warenne, 2nd Earl of Surrey, was the father of William and that he first held that title. In 1923, William Farrer agreed. However, 26 years later in a book written by Farrer and Charles Travis Clay, it is pointed out that chronologically, there may be room for other individuals between Ralph son of the 2nd Earl and William fitz Ranulf, Lord of Whitchurch, and perhaps Ralph de Warenne had a son named William, who had a son name Ranulf who is the father of William fitz Ranulf.

During the reign of Henry I in the 12th century, Whitchurch was within the North Division of Bradford Hundred which by the 1820s was referred to as North Bradford Hundred. These days the town's most prominent place of worship is St Alkmund's Anglican parish church. It was built in 1712 of red sandstone and stands on the site of the earlier Norman church. It is protected as a Grade I listed building.

Whitchurch Cemetery includes 91 Commonwealth War Graves Commission (CWGC) burials. 24 are from the First World War, in scattered plots. 67 are from the Second World War, most of them grouped in a CWGC section. 52 of the latter are Polish or Czechoslovak, as No. 4 Polish General Hospital was at Iscoyd Park just over the border in Wales. 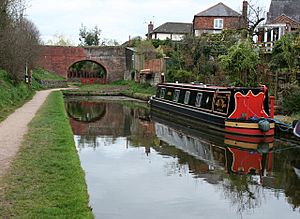 Stub of the Whitchurch Arm of the Llangollen Canal

Whitchurch railway station is on the former London and North Western (later part of the LMS) line from Crewe down the English side of the Welsh border (the Welsh Marches Line) toward Cardiff. However, Whitchurch was once the junction for the main line of the Cambrian Railways, but the section from Whitchurch to Welshpool (Buttington Junction), via Ellesmere, Whittington, Oswestry and Llanymynech, closed on 18 January 1965 in favour of the more viable alternative route via Shrewsbury. Whitchurch was also the junction for the Whitchurch and Tattenhall Railway or Chester to Whitchurch branch line, another part of the London and North Western, running via Malpas. The line closed to regular services on 16 September 1957, but use by diverted passenger trains continued until 8 December 1963.

Whitchurch has its own short arm of the Llangollen Canal and the town centre can be reached by a walk of approximately 1 mile along the Whitchurch Waterways Country Park, the last stage of the Sandstone Trail. The Whitchurch Arm is managed by a charity group of local volunteers. 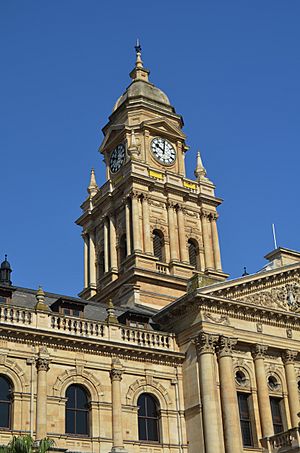 Historically the town has been the centre of cheese-making. Today Belton Cheese continues to be a major employer. It has been in existence since 1922.

The major employer in the town now is Grocontinental, a logistics provider to the food industry, which employs over 350 people. This family firm which was established in 1941 was taken over by the Dutch multinational AGRO Merchants in 2017.

The town also provides a range of services for the surrounding countryside of the North Shropshire Plain. The majority of retail stores in Whitchurch are small to medium-sized businesses concentrated in the High Street, Watergate street and Green End. There is a Tesco supermarket in the town centre (White Lion Meadow), a smaller Lidl store and a larger Sainsbury's supermarket in London Road. An Aldi store opened on the edge of town in 2020.

There are several speciality food shops including Powell's Pork Pie shop, which has been selling traditional pork pies for four generations and won the Great British Pork Pie Bronze Award. On the High Street is located Walker's Bakery and Cafe which sells bread and cakes which are baked on the premises. Watergate Street airs a number of businesses including the Pie Hole and Raven Yard Antiques.

The town was the home of the J. B. Joyce tower clocks company, established in 1690, the earliest tower clock-making company in the world, which earned Whitchurch a reputation as the home of tower clocks. Joyce's timepieces can be found as far afield as Singapore, Kabul and Cape Town (see right). The firm also helped to build Big Ben in London. However, J. B. Joyce have now left and an auction house has moved into the building. Whitchurch also has a local chamber of commerce recently retitled as the Whitchurch Business Group, an organisation setup with the aim of improving the town's business environment.

By rail Whitchurch is within commuting distance of Liverpool and Manchester (both about one hour north) and Shrewsbury (30 minutes south).

Whitchurch Rugby Club currently competes in the Midlands 1 West league, the sixth tier of English rugby. Founded in 1936, the club plays at Edgeley Park and has a full complement of mini rugby and junior teams as well as under-19s (Colts), a ladies team and four senior teams. In 1998–99, it was promoted to National Division Three North, a position it maintained until the 2002–03 season.

The Chester Road Bowling Club has been in existence since 1888. It was originally a bowling and tennis club. It has over 160 members and fields 23 teams (mostly men and women) in six different leagues. Another bowling club, the Whitchurch and District, was founded in 1924.

The Whitchurch Walkers is an active group of residents interested in walking and the protection of footpaths. It organises a range of events, including an annual walking festival. The Sandstone Trail starts/end at the Whitchurch arm of the canal. It forms part of the Shropshire Way.

On the northern edge of the town is the Macdonald Hill Valley Hotel, which has a fitness centre, a swimming pool and two golf courses.

Since August 2019, Alderford Lake, just to the south of the town, has hosted a parkrun, which is a free, weekly timed 5 km run/walk, every Saturday morning at 9am. 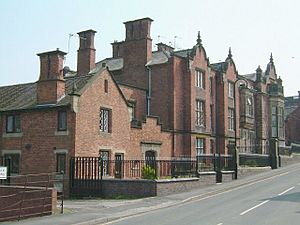 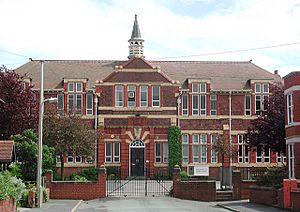 Whitchurch has a long history of schools. Whitchurch Grammar School was established in 1548 by Rev Sir John Talbot, the Rector of Whitchurch in the 1540s. The school opened in 1550 making it one of the oldest schools in England. It was restricted to boys. Next door to it a school for girls was established. They closed in 1936 and became part of the new Sir John Talbot’s School which is located on the edge of the town. It has about 500 students aged 11–18. This school is now part of the Marches Academy Trust.

The main primary school in the town is Whitchurch CE Junior School, which has about 300 pupils aged 7–11. Younger children attend Whitchurch CE Infant and Nursery School.

There is an active branch of the University of the Third Age with over 350 members.

This Is the House That Jack Built, a book illustrated by Randolph Caldecott.

All content from Kiddle encyclopedia articles (including the article images and facts) can be freely used under Attribution-ShareAlike license, unless stated otherwise. Cite this article:
Whitchurch, Shropshire Facts for Kids. Kiddle Encyclopedia.