The origins of the settlement date to Roman times, when salt from Nantwich was used by the Roman garrisons at Chester (Deva Victrix) and Stoke-on-Trent as both a preservative and a condiment. Salt has been used in the production of Cheshire cheese and in the tanning industry, both products of the dairy industry based in the Cheshire Plain around the town. "Nant" comes from the Welsh for brook or stream. Wich and wych are names used to denote brine springs or wells. In 1194 there is a reference to the town as being called Nametwihc, which would indicate it was once the site of a pre-Roman Celtic nemeton or sacred grove.

In the Domesday Book, Nantwich is recorded as having eight salt houses. It had a castle and was the capital of a barony of the earls of Chester, and of one of the seven hundreds of medieval Cheshire. Nantwich is one of the few places in Cheshire to be marked on the Gough Map, which dates from 1355–66. It was first recorded as an urban area at the time of the Norman conquest, when the Normans burned the town to the ground leaving only one building standing.

The town is believed to have been a salt-producing centre from the 10th century or earlier. The Norman castle was built at the crossing of the Weaver before 1180, probably near where the Crown Inn now stands. Although nothing remains of the castle above ground, it affected the town's layout. During the medieval period, Nantwich was the most important salt town and probably the second most important settlement in the county after Chester. By the 14th century, the town held a weekly cattle market at the end of what is today is Beam Street, and it was also important for its tanning industry centred on Barker Street. 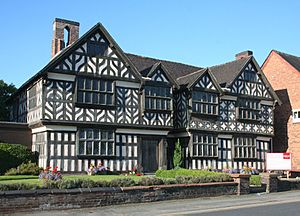 Churche's Mansion, one of the few buildings in Nantwich to survive the fire of 1583

A fire in December 1583 destroyed most of the town to the east of the Weaver. Elizabeth I contributed financially to the town's rebuilding, which occurred rapidly and followed the plan of the destroyed town. Beam Street was so renamed to reflect the fact that timber (including wood from Delamere Forest) to rebuild the town was transported along it. A plaque marking the 400th anniversary of the fire and of Nantwich's rebuilding was unveiled by the Duke of Gloucester on 20 September 1984.

During the English Civil War Nantwich declared for Parliament, and consequently it was besieged several times by Royalist forces. The final, six-week-long, siege was lifted following the victory of the Parliamentary forces in the Battle of Nantwich on 26 January 1644, which has been re-enacted as Holly Holy Day on its anniversary every year since 1973 by the Sealed Knot, an educational charity. The name comes from the sprigs of holly worn by the townsfolk in their caps or clothing in the years after the battle, in its commemoration.

The salt industry peaked in the mid-16th century, with around 400 salt houses in 1530, and had almost died out by the end of the 18th century; the last salt house closed in the mid-19th century. Nikolaus Pevsner considers the decline in the salt industry to have been the critical factor in preserving the town's historic buildings. The last tannery closed in 1974. The town's location on the London to Chester road meant that Nantwich began to serve the needs of travellers in medieval times. This trade declined in the 19th century, however, with the opening of Telford's road from London to Holyhead, which offered a faster route to Wales, and later when the Grand Junction Railway bypassed the town.

The existence of a watermill south of Nantwich Bridge was noted in 1228 and again around 1363, though the cutting of a mill race or leat and the creation of an upstream weir, river diversion and the resulting Mill Island has been ascribed to the 16th century (possibly after the original mill was destroyed in the 1583 'Great fire of Nantwich'). During the mid-17th century, the mill was acquired by local land-owners, the Cholmondeley's, who retained it until the 1840s.

Originally a corn mill, it became a cotton mill (Bott's Mill) from 1789 to 1874, but returned to use as a corn mill; it was recorded as such on the Ordnance Survey First Edition map of Nantwich in 1876. Around 1890 a turbine was installed to replace the water wheel.

It was demolished in the 1970s after a fire. The site was subsequently landscaped, with further stabilising work to the remaining foundations of the mill in 2008, and today forms part of a riverside park area. Proposals (as yet unfulfilled) have been made for small-scale hydropower generation using the mill race; Nantwich Mill Hydro Generation Ltd (in December 2016 dormant) was incorporated in April 2009.

Nantwich's brine springs were used for spa or hydrotherapy purposes at two locations: the centrally-located Snow Hill swimming pool (inaugurated in 1883; the open-air brine pool is still in use today), and the Brine Baths Hotel, situated in 70 acres of parkland to the south of the town, from the 1890s until the mid-20th century.

The hotel was originally a mansion, Shrewbridge Hall, built for Michael Bott (owner of Nantwich Mill) in 1828. The building was purchased by the Nantwich Brine and Medicinal Baths Company in 1883, expanded and opened as the Brine Baths Hotel in 1893, with "a well-appointed suite of brine and medicinal baths," - also described as the "strongest saline baths in the world." These baths were used for the treatment of patients suffering from ailments including gout, rheumatism, sciatica and neuritis, with two suites of baths.

The hotel's grounds included gardens, tennis courts, a 9-hole golf course and a bowling green. The latter is the most notable surviving feature, today managed by the Nantwich Park Road Bowling Club, founded in 1906.

The hotel served as an auxiliary hospital during World War I; during World War II, it became an army base and then accommodated WAAF personnel. It closed as a hotel in 1947, and in 1948 became a convalescent home for miners. In 1952 it was closed and unsuccessfully put up for sale, being demolished in 1959. The hotel's grounds were later developed for housing - the Brine Baths Estate - and schools (Brine Leas School and Weaver Primary School). 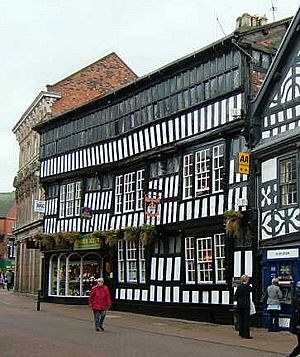 Nantwich, outside Chester, has the largest collection of historic buildings in the county. The listed buildings are clustered mainly in the town centre on Barker Street, Beam Street, Churchyard Side, High Street and Hospital Street, and extending across the Weaver on Welsh Row. The majority are located within the 38 hectares (94 acres) of conservation area, which broadly follows the boundaries of the late medieval and early post-medieval town.

The oldest listed building is St Mary's Church, which dates from the 14th century and is listed Grade I. Two other listed buildings are known to pre-date the fire of 1583: Sweetbriar Hall and the Grade I listed Churche's Mansion, both timber-framed Elizabethan mansion houses. A few years after the fire, William Camden described Nantwich as the "best built town in the county", and particularly fine examples of timber-framed buildings constructed during the town's rebuilding include 46 High Street and the Grade I listed Crown coaching inn. Many half-timbered buildings, such as 140–142 Hospital Street, have been concealed behind brick or rendering. The town contains many Georgian town houses. Good examples include Dysart Buildings, 9 Mill Street, Townwell House and 83 Welsh Row. Several examples of Victorian corporate architecture are listed, including the former District Bank by Alfred Waterhouse. The most recent listed building is 1–5 Pillory Street, a curved corner block in 17th century French style which dates from 1911. The majority of the town's listed buildings were originally residential, but churches, chapels, public houses, schools, banks, almshouses and workhouses are also represented. Unusual listed structures include a mounting block, twelve cast-iron bollards, a stone gateway, two garden walls and a summerhouse.

Dorfold Hall is a Grade I listed Jacobean mansion in the nearby village of Acton and was considered by Pevsner to be one of the two finest Jacobean houses in Cheshire. Nantwich Show, including the International Cheese Awards, takes place in the hall's grounds each summer.

Nantwich Museum is in Pillory Street. It has galleries on the history of the town, including Roman salt making, Tudor Nantwich's Great Fire, the Civil War Battle of Nantwich (1644) and the more recent shoe and clothing industries. There is also a section devoted to the local cheese-making industry. Hack Green Secret Nuclear Bunker, a few miles outside the town, is a formerly government-owned nuclear bunker, now a museum. Also in Pillory Street is the 82-seat Nantwich Players Theatre, which puts on about five plays a year.

The name of Jan Palach Avenue in the south of the town commemorates the self-immolation of a student in Czechoslovakia in 1969. 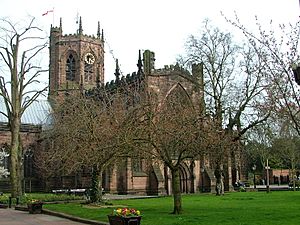 Nantwich is on the Cheshire Plain, on the banks of the River Weaver. The Shropshire Union Canal runs to the west of the town on an embankment, crossing the A534 via an iron aqueduct. The basin is a popular mooring for visitors to the town. It joins the Llangollen Canal at Hurleston to the north. The town is approximately four miles south-west of Crewe and 20 miles south-east of Chester. There is a major road junction in the town, being the meeting point of the A51, A500, A529, A530 and A534 roads. The stretch of the A534 from Nantwich to the Welsh border is regarded as one of the ten worst stretches of road in England for road safety.

Nantwich railway station is on the line from Crewe to Whitchurch, Shrewsbury and other towns along the Welsh border. The station is currently served mainly by stopping trains between Crewe and Shrewsbury.

Arriva, D&G Bus and a few smaller companies operate bus routes in and around Nantwich, some with funding from Cheshire East council.

The tower of St. Mary's Church was the origin (meridian) of the 6-inch and 1:2500 Ordnance Survey maps of Cheshire.

The annual International Cheese Awards are made in Nantwich as a part of Nantwich Show, an agricultural show held at the Dorfold Hall estate in July each year. The 83,000 sq. ft marquee used to hold the awards has had up to 4,425 different cheese entries from some 26 countries. The hosts are the celebrity chef James Martin and others.

Each year the world worm charming championships are held at Willaston Primary School in the village of Willaston, approximately two miles east of Nantwich. It began in 1980. Contestants furiously tap at the ground to get at some worms. The contest is consistently growing in popularity, but changing very little. After the contest the worms are released the same day.

Since 1996, Nantwich has hosted the annual Nantwich Jazz & Blues Festival over the Easter Bank Holiday weekend. Jazz and blues artists from around the country perform in pubs and venues across the town.

The annual Nantwich Food Festival is held in the town centre over the first weekend in September. Re-established as a free-entry festival in 2010, it attracts numerous artisan producers from the local area and further afield, and provides chef demonstrations, family activities and entertainment. It draws in an estimated 30,000 visitors a year.

All content from Kiddle encyclopedia articles (including the article images and facts) can be freely used under Attribution-ShareAlike license, unless stated otherwise. Cite this article:
Nantwich Facts for Kids. Kiddle Encyclopedia.