Crewe /kruː/ is a railway town and civil parish within the borough of Cheshire East and the ceremonial county of Cheshire, England. The area has a population of 72,863. Crewe is perhaps best known as a large railway junction and home to Crewe Works, for many years a major railway engineering facility for manufacturing and overhauling locomotives, but now much reduced in size. From 1946 until 2002 it was also the home of Rolls-Royce motor car production. The Pyms Lane factory on the west of the town now produces Bentley motor cars exclusively. Crewe is 158 miles north of London and 35 miles south of Manchester.

Although the name Creu first appears in the Domesday Book, the modern urban settlement of Crewe was not formally planned out until 1843 by Joseph Locke to consolidate the "railway colony" that had grown up since around 1840–41 in the area near to the railway junction station opened in 1837, even though it was called Crewe by many, from the start. Crewe was thus named after the railway station, rather than the other way round. The name derives from an Old Welsh word 'criu', meaning 'weir'.

Until the Grand Junction Railway (GJR) company chose Crewe as the site for its locomotive works and railway station in the late 1830s, Crewe was a village with a population (c. 1831) of just 70 residents. Winsford, 7 miles (11 km) to the north, had rejected an earlier proposal, as had local landowners in neighbouring Nantwich, 4 miles (6 km) away. Crewe railway station was built in fields near to Crewe Hall and was completed in 1837. 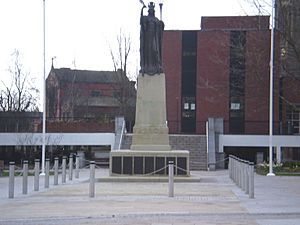 A new town grew up, in the parishes of Monks Coppenhall and Church Coppenhall, alongside the increasingly busy station, with the population expanding to reach 40,000 by 1871. GJR chief engineer Joseph Locke helped lay out the town.

The town has a large park, Queen's Park (laid out by engineer Francis Webb), the land for which was donated by the London and North Western Railway, the successor to the GJR. It has been suggested that their motivation was to prevent the rival Great Western Railway building a station on the site, but the available evidence indicates otherwise.

The railway provided an endowment towards the building and upkeep of Christ Church. Until 1897 its vicar, non-conformist ministers and schoolteachers received concessionary passes, the school having been established in 1842. The company provided a doctor's surgery with a scheme of health insurance. A gasworks was built and the works water supply was adapted to provide drinking water and a public baths. The railway also opened a cheese market in 1854 and a clothing factory for John Compton who provided the company uniforms, while McCorquodale of Liverpool set up a printing works.

During World War II the strategic presence of the railways and Rolls-Royce engineering works (turned over to producing aircraft engines) made Crewe a target for enemy air raids, and it was in the flight path to Liverpool. The borough lost 35 civilians to these, the worst raid was on 29 August 1940 when some 50 houses were destroyed, close to the station.

Crewe crater on Mars is named after the town of Crewe. Crewe was described by author Alan Garner in his novel Red Shift as "the ultimate reality". Bill Bryson described Crewe as "the armpit of Cheshire" in his 1995 book Notes from a Small Island. 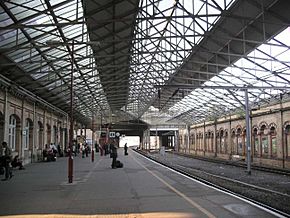 Platform 12 at Crewe railway station, before the roof over it and the adjacent tracks was removed

Crewe railway station is less than a mile from Crewe town centre, although it was not incorporated into the then Borough of Crewe until 1937. It is one of the largest stations in the North West and a major interchange station on the West Coast Main Line. It has 12 platforms in use and has a direct service to London Euston (average journey time of around 1 hour 35 minutes), Edinburgh, Cardiff, Liverpool, Manchester, Birmingham, Glasgow, Derby, Stoke-on-Trent, Chester, Wrexham and Holyhead for the ferry connections to Dublin Port. Many other towns and cities also have railway connections to Crewe.

The main bus company in Crewe is D&G Bus following the reduction of funding given to Arriva North West, who still run longer distance services to Chester, Northwich, Macclesfield and Winsford. Other operators include BakerBus and First Potteries who operate a single service running into Stoke-on-Trent.

Crewe Heritage Centre is located in the old LMS railway yard for Crewe railway station. The museum has three signal boxes and an extensive miniature railway with steam, diesel and electric traction. The most prominent exhibit of the museum is the British Rail Class 370 Advanced Passenger Train. 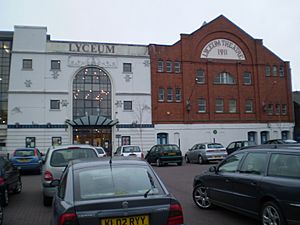 The Grade II-listed Edwardian Lyceum Theatre is in the centre of Crewe. It was built in 1911 and shows drama, ballet, opera, music, comedy and pantomime. The theatre was originally located on Heath Street from 1882. The http://www.axisartscentre.org.uk Axis Arts Centre is on the Manchester Metropolitan University campus in Crewe. It relocated from the university's Alsager Campus when it closed. The centre has a programme of touring new performance and visual art work. The Box on Pedley Street is the town's main local music venue.

Crewe has six Anglican churches, three Methodist, one Roman Catholic (which has a weekly mass in Polish) and two Baptist.

There is a museum dedicated to Primitive Methodism in the nearby village of Englesea-Brook.

The Jacobean mansion Crewe Hall is located to the east of the town near Crewe Green. It is a grade I listed building, built in 1615–36 for Sir Randolph Crewe. Today, it is used as a hotel, restaurant and health club.

There is a multiplex ODEON cinema on Phoenix Leisure Park on the edge of the town centre, as well as a bowling alley.

Queen's Park is the town's main park, and is currently undergoing a £6.5 million transformation. It features walkways, a children's play area, crown green bowling, putting, a boating lake, grassed areas, memorials and a café. Jubilee Gardens are in Hightown and there is also a park on Westminster Street.

Crewe Carnival does not take place each summer now due to lack of funding by CEC.

The weekly Crewe Chronicle, the Crewe and Nantwich Guardian and the daily Sentinel newspapers all cover the town. Local radio stations are Silk 106.9 from Macclesfield, Signal 1 and Signal 2 from Stoke-on-Trent and BBC Radio Stoke. Nantwich-based RedShift Radio is a community internet radio station covering Crewe, Nantwich and South Cheshire. The Cat, based in South Cheshire College broadcasts on FM to Crewe, Nantwich and surrounding areas on 107.9FM and online as Crewe and Nantwich's first and only dedicated FM radio station.

In Threads (1984), Crewe is destroyed by a single megaton Soviet Union nuclear weapon, given its strategic roles as a transport hub and manufacturer of small arms for the British Army. Fallout from the ground-burst blast contaminates Sheffield and other adjacent cities, worsening their existing problems after being hit in a fictional nuclear exchange between NATO and the USSR in this television drama.

All content from Kiddle encyclopedia articles (including the article images and facts) can be freely used under Attribution-ShareAlike license, unless stated otherwise. Cite this article:
Crewe Facts for Kids. Kiddle Encyclopedia.