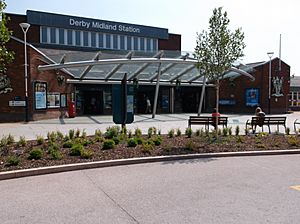 Derby railway station, also known as Derby Midland, is a main line station serving the city of Derby in England. It is owned by Network Rail and managed by East Midlands Trains. The station is also used by CrossCountry services and one daily Northern service.

It lies 127 miles 68 chains (205.8 km) north of London St Pancras. It is situated to the south-east of Derby city centre, and is close to the west bank of the River Derwent.

All content from Kiddle encyclopedia articles (including the article images and facts) can be freely used under Attribution-ShareAlike license, unless stated otherwise. Cite this article:
Derby railway station Facts for Kids. Kiddle Encyclopedia.