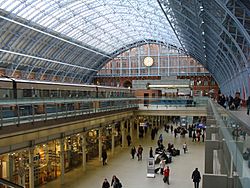 The upper level of The Arcade at St Pancras railway station, looking south under Barlow's magnificent roof. The old trainshed roof has been reglazed and repainted.

The Grade I listed building stands on Euston Road between the British Library, King's Cross station and the Regent's Canal. It was opened in 1868 by the Midland Railway as its southern terminus. The company became the LMS: the London, Midland and Scottish railway. When the station opened, the arched train shed was the largest single-span roof in the world.

After escaping planned demolition in the 1960s, the complex was renovated and expanded during the 2000s at a cost of £800 million. A secure terminal area was constructed for Eurostar services to Continental Europe—via High Speed 1 and the Channel Tunnel—along with platforms for domestic connections to the north and south-east of England. The restored station houses fifteen platforms, a shopping centre and a bus station, in addition to London Underground services from King's Cross St. Pancras tube station. St Pancras is owned by London and Continental Railways along with the adjacent urban regeneration area known as King's Cross Central.

All content from Kiddle encyclopedia articles (including the article images and facts) can be freely used under Attribution-ShareAlike license, unless stated otherwise. Cite this article:
St Pancras station Facts for Kids. Kiddle Encyclopedia.