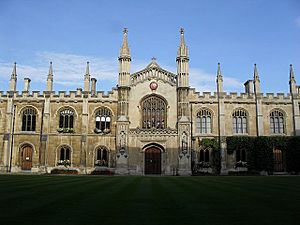 Corpus Christi College (full name:The College of Corpus Christi and the Blessed Virgin Mary) is one of the colleges of the University of Cambridge, England. It was built in 1352 and is special because it was created by local people living in Cambridge, not by royals or nobles as most of the other colleges. It is one of the smallest colleges with about 450 students.

Corpus Christi College has the oldest court in Europe, Old Court, finished in 1356. The New Court, that also has the chapel (small church), was built in 1827. On the corner of the student's library there is the Corpus Clock, a clock made of gold which has a very complicated mechanism. The clock is visible on the main street of Cambridge, King's Parade. The college has another library, the Parker library, that has very old and precious books.

Some very famous people have studied here, like Thomas Cavendish.

All content from Kiddle encyclopedia articles (including the article images and facts) can be freely used under Attribution-ShareAlike license, unless stated otherwise. Cite this article:
Corpus Christi College, Cambridge Facts for Kids. Kiddle Encyclopedia.