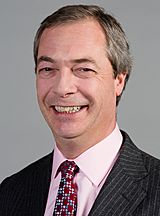 Euroscepticism is the criticism of the European Union (EU). Some observers also say that the total rejection of the EU is euroscepticism. Euroscepticism should not be confused with Anti-Europeanism, which is the dislike or fear of European culture and/or people.

The rise of right-wing populist parties in Europe have been contributed to their Eurosceptic views. On 23 June 2016, the United Kingdom voted to leave the European Union with 52% voting to leave.

Some major Eurosceptic parties are shown below (organized by country):

All content from Kiddle encyclopedia articles (including the article images and facts) can be freely used under Attribution-ShareAlike license, unless stated otherwise. Cite this article:
Euroscepticism Facts for Kids. Kiddle Encyclopedia.