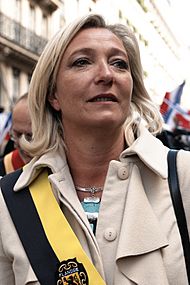 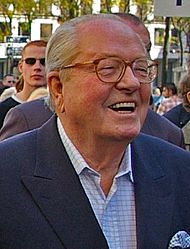 The National Rally (French: Rassemblement national or RN) is a political party in France. It used to be called the National Front until 2018.

The party was founded on 5 October 1972 by Jean-Marie Le Pen. The party was first called the National Front for French Unity (Front national pour l'unité française). Their most successful performance in the legislative elections was in 1997, where they received 14.9% of the vote in the 1st round and 5.7% in the 2nd round. Recently, they won the 2014 European Parliament election with 24.85% of the vote.

Jean-Marie Le Pen was leader of the party from 1972 until 2011. In 2011, the party voted to make Marine Le Pen leader. She wanted to soften the party's image. Marine Le Pen expelled her father from the party in 2015 after he made some controversial statements. On 24 April 2017, a day after the first round of the 2017 French presidential election, Marine Le Pen stepped down from her position. Steeve Briois is now the temporary leader.

The party is patriotic. The party is very Eurosceptic (meaning they are against the European Union) and wants to limit immigration. Marine Le Pen supports letting the government control health, education, transportation, banking and energy.

All content from Kiddle encyclopedia articles (including the article images and facts) can be freely used under Attribution-ShareAlike license, unless stated otherwise. Cite this article:
National Rally (France) Facts for Kids. Kiddle Encyclopedia.