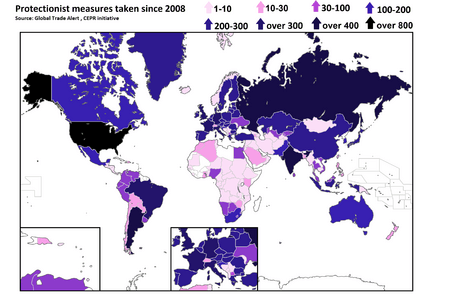 Protectionist measures taken since 2008 according to Global Trade Alert.

Protectionism means that a country has laws or other rules that make it easier for their own products and brands to sell by making goods from foreign countries more expensive or harder to get.

Many protectionists (people who believe in protectionism) support big tariffs (taxes on a trade involving a foreign country) because the government can get a lot of money from the tariffs.

Protectionism is no longer popular now. Instead, people support free trade (the opposite of protectionism where the government makes it easier for the country to trade with other countries).

All content from Kiddle encyclopedia articles (including the article images and facts) can be freely used under Attribution-ShareAlike license, unless stated otherwise. Cite this article:
Protectionism Facts for Kids. Kiddle Encyclopedia.