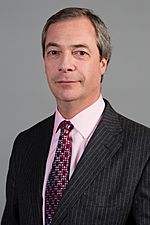 Supporters of UKIP mostly believe in the following things:

In 2008 UKIP banned people who used to be members of the British National Party (BNP) from joining.

In the May 2014 local elections UKIP got 30% of the vote in Sunderland. The party gained 155 local council seats across the country.

UKIP came third in the May 2015 general election, after the Labour Party and the Conservative Party. The party got 12.9% of the vote and gained one seat.

In the 2017 general election, UKIP's share of the vote went down to 1.8 and they didn't win any seats. The next day UKIP's leader Paul Nuttall resigned.

There are currently over 20,000 people who are members of the UKIP.

In February 2018 Gerard Batten become leader of the party firstly on an interim basis before winning the UKIP leadership election in April 2018 unopposed.

In the 2018 UK local elections UKIP lost 124 of the 126 seats it was defending, and gained a single seat in Derby.

All content from Kiddle encyclopedia articles (including the article images and facts) can be freely used under Attribution-ShareAlike license, unless stated otherwise. Cite this article:
UK Independence Party Facts for Kids. Kiddle Encyclopedia.