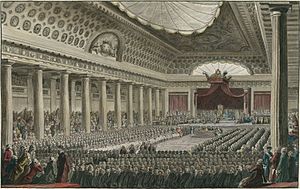 5 May 1789: Opening of the Estates-General in Versailles in 1789; the conservatives sat on the right

The right-wing supports tradition and authority. The right-wing in some countries, like the United States, may also usually be in support of social liberalism and a capitalist economy where the government has little influence. Usually the right-wing thinks of society as similar to a living thing, what is called "organic society". They believe that society's customs and traditions are a collection of things that we have learned from the past and are useful and should be maintained as much as possible.

One of the most popular right-wing presidents was Ronald Reagan.

All content from Kiddle encyclopedia articles (including the article images and facts) can be freely used under Attribution-ShareAlike license, unless stated otherwise. Cite this article:
Right-wing Facts for Kids. Kiddle Encyclopedia.