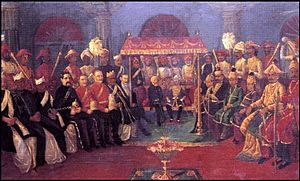 The word Mahārāja (also spelled maharajah) is Sanskrit for "great king" or "high king". Many languages of India have borrowed the word 'maharaja', there languages include Punjabi, Bengali, Hindi and Gujarati. Its use is mainly for Hindu rulers. A female ruler is known as Maharani (or Maharanee) or great queen. She can be the wife of a Maharaja or a ruler herself.

In 1971, the government of Indira Gandhi abolished the titles and money for all Indian rulers. However some people still claim such titles.

Before independence in 1947, India and Pakistan contained more than 600 princely states each with its own ruler. Some states called the ruler Raja or Thakur (if the ruler were Hindu) or Nawab (if he was Muslim); there were many other titles as well.

All content from Kiddle encyclopedia articles (including the article images and facts) can be freely used under Attribution-ShareAlike license, unless stated otherwise. Cite this article:
Maharaja Facts for Kids. Kiddle Encyclopedia.