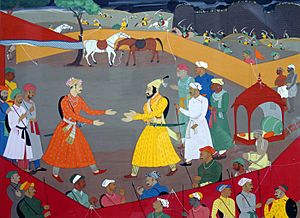 A Raja (Sanskrit राजा (rājā), also spelled Rajah) is a monarch, or princely ruler of the Kshatriya varna.

The title has a long history in the Indian subcontinent and Southeast Asia, as it is found in the Rigveda. It can also be used as a name for non-royal Indians. In Pakistan, Raja is still used by many Muslim Rajput clans as hereditary titles. Raja is also used as a name by Hindus and Sikhs.

Rajas in the Malay world

All content from Kiddle encyclopedia articles (including the article images and facts) can be freely used under Attribution-ShareAlike license, unless stated otherwise. Cite this article:
Raja Facts for Kids. Kiddle Encyclopedia.