Jammu is a city in Jammu and Kashmir. It is on the banks of the Tawi River which is a tributary of the Chenab River. The Dogri language is spoken here among Muslims, Hindus and Sikhs. Jammu is also known as the "City of Temples" as it has many beautiful and historical temples and shrines with glittering domes of old mosques. 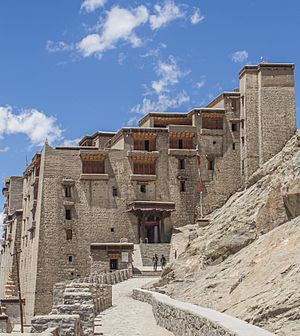 Jammu is the main cultural and economic centre of Jammu province and the state also. The city has a number of various industries. Jammu also has the largest number of shopping complexes, cinemas, recreation centres in the state.

Tourism is the largest industry. It is also a focal point for the pilgrims going to Sri Mata Vaishno Devi and also to Kashmir valley as it is second last railway terminal in North India. All the routes leading to the main provinces start at Jammu city, so throughout the year the city remains full of people from all the corners of India. The Old Heritage City has many contemporary structures.

All content from Kiddle encyclopedia articles (including the article images and facts) can be freely used under Attribution-ShareAlike license, unless stated otherwise. Cite this article:
Jammu Facts for Kids. Kiddle Encyclopedia.