Jammu is one of the three administrative divisions within Jammu and Kashmir, the northernmost state in India. Most of the land is hilly or mountainous, including the Pir Panjal Range which separates it from the Kashmir Valley and part of the Great Himalayas in the eastern districts of Doda and Kishtwar. Its principal river is the Chenab. Chenab Valley is another important division in Jammu region.

Jammu city is the largest city in Jammu and the winter capital of Jammu and Kashmir. It is also known as "City of Temples" as it has many temples and shrines, with glittering shikhars soaring into the sky, which dot the city’s skyline, creating the ambiance of a holy and peaceful city.

Home to some of India's most popular Hindu shrines, such as Vaishno Devi, Jammu is a major pilgrimage centre for Hindus. A majority of Jammu's population practices Hinduism, while Islam and Sikhism enjoy a strong cultural heritage in the region. Due to relatively better infrastructure, Jammu has emerged as the main economic center of the state. 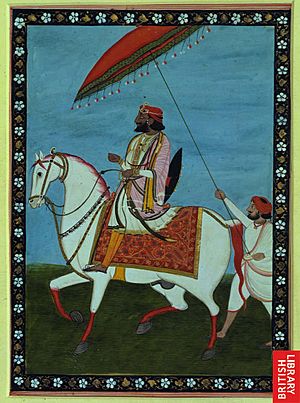 Maharaja Gulab Singh, the founder of princely state of Jammu and Kashmir

Jammu, winter capital of the maharajas and second largest city in the territory, was traditionally the seat of Dogra power. Of the total population of Jammu, more than two-thirds are classed as Kashmiri Hindus. Of these the greater number live in the southeastern portion of the Kashmir region. They are closely related to the Punjabi-speaking peoples in Punjab region of India and Pakistan. Many speak the Dogri language. The majority of the state’s Kashmiri Sikhs also live in the Jammu region. To the northwest, however, the proportion of Muslims increases, with Muslims making up a dominant majority in the area around the western town of Poonch District.

Jammu is the only region in Kashmir that has a Hindu majority population. Although Islam and Sikhism enjoy a very strong cultural heritage with neighbouring Punjab (Pakistan) in the wider region. Most Hindus are either Dogras or people who migrated from Kotli, Mirpur, and the Kashmir Valley. The Sikhs are of Punjabi descent. Jammu's Kashmir is now well connected with the rest of India by rail, road and air, making it far better connected than the rest of the Kashmiri region through Gurdaspur District.

Jammu is known for its landscape, ancient temples, Hindu shrines, Mubarak Mandi Palace, Amar Mahal Palace (a castle type) now a Museum, gardens and forts. Hindu holy shrines of Amarnath and Vaishno Devi attracts tens of thousands of Hindu devotees every year. Jammu's beautiful natural landscape has made it one of the most favoured destinations for adventure tourism in South Asia. Jammu's historic monuments feature a unique blend of Islamic and Hindu architecture styles.

All content from Kiddle encyclopedia articles (including the article images and facts) can be freely used under Attribution-ShareAlike license, unless stated otherwise. Cite this article:
Jammu region Facts for Kids. Kiddle Encyclopedia.