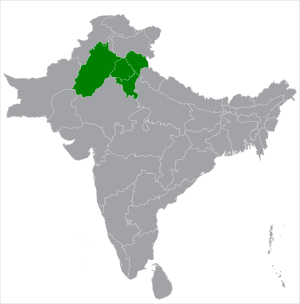 Map of the Punjab region in Indian subcontinent

Punjab is a region in South Asia. It is divided by the Radcliffe Line: Some parts of it are in the Islamic Republic of Pakistan, and others are in the Republic of India. It is in a plain, with the River Indus flowing through the western part, which is in Pakistan. The soil is very fertile. It lives from agriculture. Main religions in the region are Islam, Sikhism and Hinduism.

All content from Kiddle encyclopedia articles (including the article images and facts) can be freely used under Attribution-ShareAlike license, unless stated otherwise. Cite this article:
Punjab region Facts for Kids. Kiddle Encyclopedia.