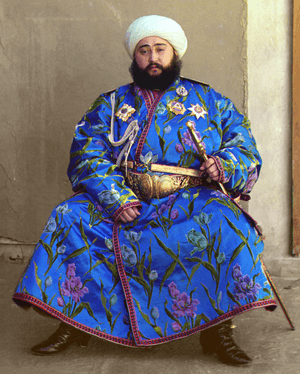 A turban (from Persian دولبند‌, dulband; via Middle French turbant) is a type of headwear based on cloth winding. Featuring many variations, it is worn as customary headwear by people of various cultures. Communities with prominent turban-wearing traditions can be found in the Indian subcontinent, Southeast Asia, the Arabian Peninsula, the Middle East, the Balkans, the Caucasus, Central Asia, North Africa, West Africa, East Africa, and amongst some Turkic peoples in Russia as well as Ashkenazi Jews.

A keski is a type of turban, a long piece of cloth roughly half the length of a traditional "single turban", but not cut and sewn to make a double-width "Double Turban" (or Double Patti).

Wearing turbans is common among Sikhs, including women. The headgear also serves as a religious observance, including among Shia Muslims, who regard turban-wearing as Sunnah fucadahass (confirmed tradition).

The turban is also the traditional headdress of Sufi scholars. Additionally, turbans have often been worn by nobility, regardless of religious background. They are also sometimes donned to protect hair or as a headwrap for women following cancer treatments.

All content from Kiddle encyclopedia articles (including the article images and facts) can be freely used under Attribution-ShareAlike license, unless stated otherwise. Cite this article:
Turban Facts for Kids. Kiddle Encyclopedia.