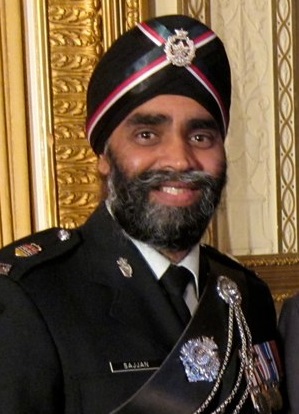 Harjit Singh Sajjan PC OMM MSM CD MP (born September 6, 1970) is a Canadian Liberal politician. He is the current Canadian Minister of National Defence. Sajjan is also a Member of Parliament representing the Vancouver South riding. He was a decorated lieutenant-colonel in the Canadian Armed Forces. Before becoming a politician he spent 11 years as a police officer and detective.

All content from Kiddle encyclopedia articles (including the article images and facts) can be freely used under Attribution-ShareAlike license, unless stated otherwise. Cite this article:
Harjit Sajjan Facts for Kids. Kiddle Encyclopedia.