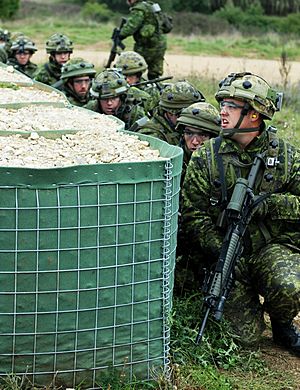 Soldiers from the army

The Land Force Command (LFC) is the army of Canada and is often called the Canadian Army. It is part of the Canadian Forces. It is made of 19,500 full-time soldiers and 16,000 part-time soldiers. Canada also has an navy and an air force.

The army has infantry, artillery and tanks.

All content from Kiddle encyclopedia articles (including the article images and facts) can be freely used under Attribution-ShareAlike license, unless stated otherwise. Cite this article:
Canadian Forces Land Force Command Facts for Kids. Kiddle Encyclopedia.