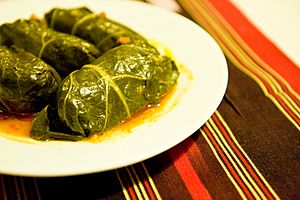 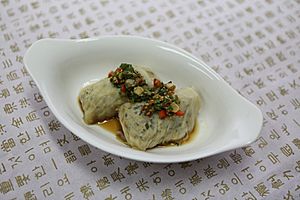 A cabbage roll is a dish consisting of cooked cabbage leaves wrapped around a variety of fillings. It is common to the cuisines of Central, Northern, Eastern and Southeastern Europe and much of Western Asia, Northern China, as well as parts of North Africa. Meat fillings are traditional in Europe, and include beef, lamb, or pork seasoned with garlic, onion, and spices. Grains such as rice and barley, mushrooms, and vegetables are often included as well. Fermented cabbage leaves are used for wrapping, particularly in southeastern Europe. In Asia, seafoods, tofu, and shiitake mushrooms may also be used. Chinese cabbage is often used as a wrapping.

Cabbage leaves are stuffed with the filling which are then baked, simmered, or steamed in a covered pot and generally eaten warm, often accompanied with a sauce. The sauce varies widely by cuisine. In Sweden and sometimes in Finland, stuffed cabbage is served with lingonberry jam, which is both sweet and tart. In Eastern Europe, tomato-based sauces or plain sour cream are typical. In Lebanon, the cabbage is stuffed with rice and minced meat and only rolled to the size of a cigar. It is usually served with a side dish of yogurt and a type of lemon and olive oil vinaigrette seasoned with garlic and dried mint.

Nancy Krcek Allen, who wrote a cooking textbook, stated that the origins are unclear and that it is possible multiple groups of people invented it at the same time. A version called holishkes is traditionally eaten by Jews on Simchat Torah; stuffed cabbage is described by Gil Marks to have entered Jewish cooking some 2,000 years ago. Recipes vary depending on region; Romanians and northern Poles prefer a savory sauce, while Galicia and Ukraine favor sweet-and-sour, for example. Stuffed cabbage is popular among Romani people. Stuffed cabbage is a dish in Romani cuisine, also known as Gypsy food. 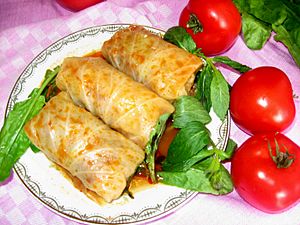 Stuffed cabbage leaves (Azerbaijani: Kələm dolması ) are popular all year round in Azerbaijan, but especially in the winter months when other vegetables are less available. The stuffing usually consists of rice and herbs such as coriander, mint and dill, onions and meat, although there is a variation – yalanchi (fake) dolma, which is meat-free.

Cabbage rolls are a staple diet of the population in Montenegro, Bosnia and Herzegovina, Bulgaria, Macedonia, Romania, Serbia and Croatia. Leaves of brined cabbage stuffed with ground beef, pork and rice is a favorite during Christmastime and other non fasting holy days, while meat is omitted or substituted with crushed walnuts on fasting holy days. Traditionally cabbage rolls are simmered long in a paprika based sauce with chunks of smoked bacon. 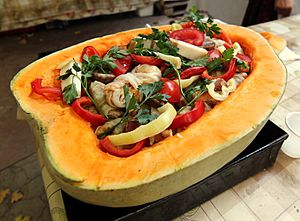 Romanian sarmale cooked inside a pumpkin

Sarmale are Romanian stuffed cabbage rolls traditionally served on Christmas and New Year's Eve but also served throughout the year at weddings, baptism parties, and other large celebrations. Ground pork is mixed with sauteed caramelized onions and rice stuffed in a cabbage leaf, pickled sauerkraut leaf or grape leaf. For flavor, they usually consist of layers with smoked pork fat, smoked ribs, or smoked sausage.

The traditional Hungarian cabbage roll (töltött káposzta) can be made from sweet or sauerkraut cabbage leaves filled with a mixture of minced pork meat, eggs, and rice seasoned with paprika, caraway, salt, and pepper. The Hungarian version often contains minced pepper (paprika) and is served with sour cream on top. Many Hungarians serve this food during Christmas and New Year's Eve, although it is a common dish throughout the year (sweet version during summer/fall and the sour during winter/spring time). The sour stuffed cabbage is part of the traditional Hungarian pig slaughter menu and it is said that eating this during the holiday season will bring you wealth and health for the new year.

Stuffed cabbage rolls are a popular Polish dish. Pork and beef mixed with rice or barley are nestled in a cabbage leaf and cooked in the oven or on the stove until tender. 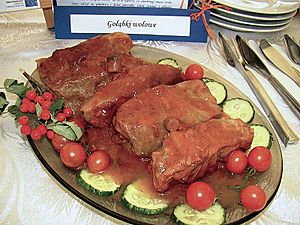 The name gołąbki means "little pigeons" in Polish. The cabbage rolls are called holubky by Czechs and Slovaks, or sarma / сарма by Serbs, Croatians and Bulgarians. The sauce is often the main difference in regional variations. In a less popular version called leniwe gołąbki (lazy cabbage rolls) the ingredients are chopped, combined together and baked or fried.

In Ukraine, the filling of holubtsi varies throughout the country. In the Carpathian region corn grits are used, whereas in the Poltava area buckwheat groats are preferred. The cereal is lightly cooked, mixed with fried onions, shkvarky (pork cracklings) or raw minced meat. The mixture is combined with spices and seasonings, and is then used as the filling for steamed fresh or pickled cabbage leaves. In spring cabbage leaves are often replaced with fresh beetroot leaves, and in the southwest – with fresh young grape leaves. The holubtsi are lightly fried and then stewed with tomato, mushroom sour cream or some other sauce. During Lenten periods this might be water mixed with kvas, while at other times it might be a meat broth.

In Left Bank Ukraine and in the south, holubtsi are usually big, made from the entire cabbage leaf, while in the Dniester region and the Carpathians the cabbage leaf is divided into several pieces. In the latter regions, cooks who made large holubtsi were considered lazy. In Poltava cooks preferred the large holubtsi because they were juicier. In most of Ukraine holubtsi were an everyday dish, but in most of Right Bank Ukraine, with the exception of Polissia, they were also included in holiday meals. Beginning in the 1920s, holubtsi began to be stuffed with a rice-meat mixture, and, instead of kvas, they began to be cooked in tomato juice, sauce or paste. This is the most common way they are prepared nowadays.

Holubtsi are a popular dish for both everyday meal and as special occasion treat. For Sviata Vecheria (Christmas Eve Supper) in many regions of Ukraine holubtsi constitute one of the twelve traditional dishes served on the night. Only Lenten ingredients are used in this case. On occasion of Sviata Vecheria, Boykos and Transcarpathians make Holubtsi from "kryzhavky" (pickled whole heads of cabbage). Into these "pickled" holubtsi they put a stuffing of rice and mushrooms. Carpathian-style holubtsi are usually made from fresh cabbage and stuffed with corn grits, or with grated raw potato (Vorokhta, Verkhovyna, Kvasy). These are best served with mushroom gravy. To differentiate the different types of holubtsi, they are wrapped into different shapes: corn-filled ones are made into the shape of envelopes, with the edges folded in, potato-filled are simply rolled up. A classic Halychian (Galician) dish Sviat Vechir dish is holubtsi stuffed with grated potato and served with a mushroom machanka (dipping sauce).

The Russian version of cabbage rolls usually consists of mincemeat mixed with cooked rice or buckwheat wrapped in cabbage leaves and stewed in a mixture of sour cream and tomato sauce. In order to save time there is another variation of that dish called lenivye golubtsy (lazy cabbage rolls). In that case, the cabbage is chopped and mixed with mincemeat and rice so there is no need to wrap every meatball in a cabbage leaf. 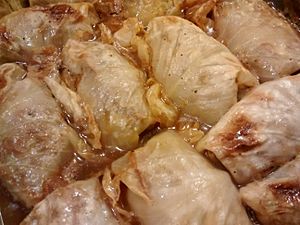 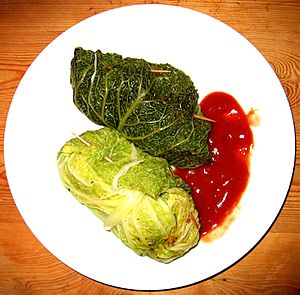 Kåldolmar ("cabbage dolma") are Swedish cabbage rolls filled with rice and minced meat (most often pork). They are traditionally eaten with boiled or mashed potatoes, gravy, and lingonberry jam. In Finland the same dish is known as kaalikääryle (plural kaalikääryleet).

In 1709, after losing the Battle of Poltava, the wounded Charles XII of Sweden and the remnants of his army escaped with their Cossack allies to the Ottoman town of Bender, in present-day Moldavia, where they were granted refuge by Sultan Ahmed III. Charles XII spent more than five years in the Ottoman Empire, trying to convince the Sultan to help him defeat the Russians. When he finally returned to Sweden in 1715, he was followed by his Ottoman creditors and their cooks. The creditors remained in Sweden at least until 1732; it is generally believed that Ottoman style dolma were introduced into Swedish cooking during this period.

As indicated by the name, Swedish kåldolmar are generally considered a variety of the dolma. Swedish is the only European language to use the Turkish term dolma ("filled") to denote cabbage rolls.

The earliest known Swedish recipe for "Dolma" is in the 1765 edition of the famous cookbook of Cajsa Warg. Warg instructed her readers to prepare the rolls using vine leaves, lamb, rice, and lemon juice. Toward the end of the recipe, however, Warg suggested that those who could not afford vine leaves could use preboiled cabbage leaves in their place. Nowadays, frozen kåldolmar, cooked with preboiled cabbage leaves, are sold in most major food stores in Sweden.

To cherish early modern cultural interchange between Sweden and the Orient, the Cabbage Dolma Day (Kåldolmens dag) is celebrated on November 30, the day Charles XII was killed during a military campaign in Norway. The celebrations were instated in 2010 by a group known as the Friends of the Cabbage Dolma (Kåldolmens vänner). In a series of media appearances, historian Petter Hellström explained that the group wanted to make November 30 a day to remember and ponder the multifaceted roots of Sweden's cultural heritage, apparently in contrast to the same day's long history as the unofficial marching day of Swedish fascism and right wing extremism. Starting in 2013, the Cabbage Dolma Day was hosted by the Swedish History Museum in Stockholm, the country's foremost historical museum. The celebrations have also been supported by a number of important civil society organizations over the years, notably the Church of Sweden and the Federation of Local History and Folk Culture (Sveriges hembygdsförbund). 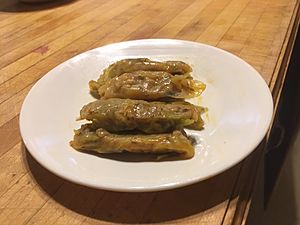 Mahshi koromb (Egyptian-style cabbage rolls). Note how the ends are not folded in.

In Egyptian cuisine, cabbage rolls are called محشي كرمب, pronounced maḥshī kromb or maḥshī koronb (as Standard Arabic [m] often turns to [n] in proximity to [b] in Egyptian Arabic), literally translating to "stuffed cabbage". The leaves are fresh and commonly cut into smaller pieces and partially pre-cooked. The most common filling is a mixture of rice, onion, tomato, herbs, and spices (most typically including mint, dill, and cumin); meat is rarely used in Egyptian stuffed cabbage. The rolls are arranged in a pot and boiled in broth or tomato-based sauce, also including the herbs and spices. As the pieces of cabbage and therefore the rolls are small, the leaves are usually simply rolled around the filling almost like a small cigar, and are left open at the ends rather than folded around the filling to produce a completely enclosed package. 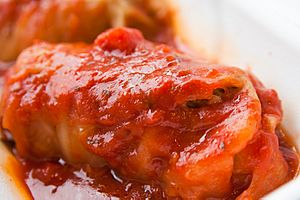 In regions heavily influenced by Polish immigrants, such as Chicago which claims the largest Polish population outside of Poland, Detroit, Pennsylvania, the southern tier of New York, and northeastern Ohio, the term usually refers instead to stuffed cabbage rolls, such as the Polish gołąbki. These are also known as pigs in a blanket. Jewish immigrants from Eastern Europe popularized the dish in New York City, where they became known as Jewish cabbage.

Cabbage rolls also feature prominently in the cuisines of Cajuns and Louisiana Creoles of southern Louisiana, where they usually take the form of ground pork mixed with rice and chopped vegetables stuffed into parboiled cabbage leaves and cooked in a tomato sauce-based liquid.

All content from Kiddle encyclopedia articles (including the article images and facts) can be freely used under Attribution-ShareAlike license, unless stated otherwise. Cite this article:
Cabbage roll Facts for Kids. Kiddle Encyclopedia.