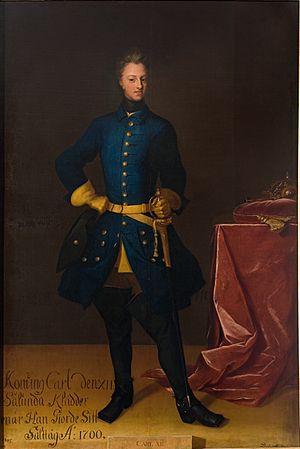 During his time as a king, he tried to expand Sweden's empire. He took part in the Nordic War (1700-1721), in which his enemies were Denmark, Poland and Russia. England and the Netherlands supported him and his armies won over the Danes during a sea battle.He also beat Peter I Russian Tsar.

After these successes, he attacked Poland, where during this time Augustus II the Strong was the king. This war was closed by the peace of Altranstadt.

Charles attacked Russia again in 1707 with the Ukrainian leader, hetman Mazeppa. After more than a 1000 km walk in 1709, the Swedish king suffered a defeat from the Tsar. Charles had to flee to Turkey. He could only return to Sweden in 1714. He tried to compensate for the lost territories by a war against Norway. During the battle he was shot in the head and died in 1718. The wars of Charles XII made Sweden weaker.

All content from Kiddle encyclopedia articles (including the article images and facts) can be freely used under Attribution-ShareAlike license, unless stated otherwise. Cite this article:
Charles XII of Sweden Facts for Kids. Kiddle Encyclopedia.