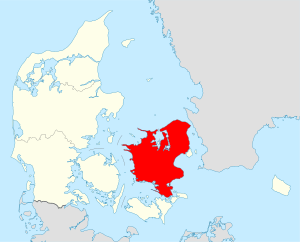 Zealand (Danish: Sjælland) is an island in the eastern part of Denmark. It is just west of Sweden and a strait called the Øresund lies between the two. It has an area of 7,031 km² and is the largest island in the country.

About 2,268,000 people were living in Zealand as of 2016. Most of these people live in and around Copenhagen, the capital of Denmark, which is on the eastern shore of Zealand.

A number of bridges and tunnels link Zealand to other parts of Denmark. They include:

All content from Kiddle encyclopedia articles (including the article images and facts) can be freely used under Attribution-ShareAlike license, unless stated otherwise. Cite this article:
Zealand Facts for Kids. Kiddle Encyclopedia.