Amritsar , historically also known as Rāmdāspur and colloquially as Ambarsar), is a historic and the second largest city in the Indian state of Punjab. The city is the administrative headquarters of the Amritsar district and is located in the Majha region of Punjab.

According to the 2011 census, the population of Amritsar was 1,132,761. It is one of the ten Municipal Corporations in the state and Karamjit Singh Rintu is the current mayor of the city. The city is situated 217 km (135 mi) northwest of state capital Chandigarh, 455 km (283 miles) northwest of New Delhi, the national capital, and 47 km (29.2 miles) northeast of Lahore, Pakistan, with the Indo-Pak Border (Wagah) being only 28 km (17.4 mi) away.

Amritsar has been chosen as one of the heritage cities for HRIDAY scheme of the Government of India. Amritsar is home to Harmandir Sahib, popularly known as "the Golden Temple," one of Sikhism's most spiritually significant and most-visited gurudwaras. The city is also known for its wooden chessboards and chess pieces manufacturing industry.

The Bhagwan Valmiki Tirath Sthal situated at Amritsar is believed to be the Ashram site of Maharishi Valmiki, the writer of Ramayana. As per the Ramayana, Sita gave birth to Lava and Kusha, sons of lord Rama at Ramtirth ashram. Large number of people visit Ramtirth Temple at annual fair. Nearby cities to Amritsar, Lahore and Kasur were said to be founded by Lava and Kusha, respectively. During Ashvamedha Yagna by Lord Rama, Lava and Kush caught the ritual horse and tied Lord Hanuman to a tree near to today's Durgiana Temple.

Guru Ram Das, the fourth Sikh guru is credited with founding the holy city of Amritsar in the Sikh tradition. Two versions of stories exist regarding the land where Ram Das settled. In one based on a Gazetteer record, the land was purchased with Sikh donations, for 700 rupees from the owners of the village of Tung.

According to the historical Sikh records, the site was chosen by Guru Amar Das and called Guru Da Chakk, after he had asked Ram Das to find land to start a new town with a man-made pool as its central point. After his coronation in 1574, and the hostile opposition he faced from the sons of Amar Das, Ram Das founded the town named after him as "Ramdaspur". He started by completing the pool, and building his new official Guru centre and home next to it. He invited merchants and artisans from other parts of India to settle into the new town with him. The town expanded during the time of Arjan financed by donations and constructed by voluntary work. The town grew to become the city of Amritsar, and the pool area grew into a temple complex after his son built the gurdwara Harmandir Sahib, and installed the scripture of Sikhism inside the new temple in 1604.

The construction activity between 1574 and 1604 is described in Mahima Prakash Vartak, a semi-historical Sikh hagiography text likely composed in 1741, and the earliest known document dealing with the lives of all the ten Gurus. 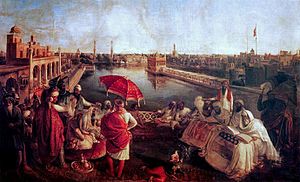 In 1766, Ahmad Shah invaded the Sikh Confederacy, besieged Amritsar, massacred the populace and destroyed the city.

During Sikh Empire in 1822 Maharaja Ranjit Singh fortified the city starting from a wall at Katra Maha Singh area. Later, Sher Singh continued with the construction of the wall with twelve gates (Lahori Darwaza, Khazana, Hakeema, Rangar Nangalia, Gilwali, Ramgarhia, Doburji, Ahluwalia, Deori Kalan, Rambagh Deori, Shahzada and Lohgarh) in it and a fort named Dhoor Kot that had fortification 25 yards broad and 7 yards high. The circumference of the walled city was around five miles. When in 1849, British annexed Punjab, Amritsar was a walled city and they build thirteenth gate to it known as Hall Gate. 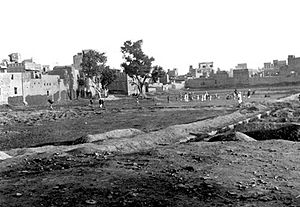 The Jallianwalla Bagh in 1919, months after the massacre 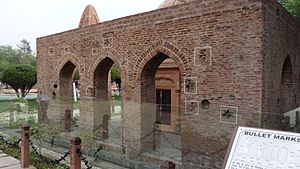 Bullet marks on the walls of the park premises

The Jallianwala Bagh massacre, involving the killings of hundreds of Indian civilians on the orders of a senior British military officer, Reginald Edward Harry Dyer, took place on 13 April 1919 in the heart of Amritsar, the holiest city of the Sikhs, on a day sacred to them as the birth anniversary of the Khalsa (Vaisakhi day).

In Punjab, during World War I (1914–18), there was considerable unrest particularly among the Sikhs, first on account of the demolition of a boundary wall of Gurdwara Rakab Ganj at New Delhi and later because of the activities and trials of the Ghadarites, almost all of whom were Sikhs. In India as a whole, too, there had been a spurt in political activity mainly owing to the emergence of two leaders: Mahatma Gandhi (1869–1948) who after a period of struggle against the British in South Africa, had returned to India in January 1915, and Annie Besant (1847–1933), head of the Theosophical Society of India, who on 11 April 1916 established the Home Rule League with autonomy for India as its goal. In December 1916, the Indian National Congress, at its annual session held at Lucknow, passed a resolution asking the king to issue a proclamation announcing that it is the "aim and intention of British policy to confer self-government on India at an early date".

On 10 April 1919, Satya Pal and Saifuddin Kitchlew, two popular proponents of the Satyagraha movement led by Gandhi, were called to the deputy commissioner's residence, arrested and sent off by car to Dharamsetla, a hill town, now in Himachal Pradesh. This led to a general strike in Amritsar. Excited groups of citizens soon merged into a crowd of about 50,000 marchings on to protest to the deputy commissioner against the arrest of the two leaders. The crowd, however, was stopped and fired upon near the railway foot-bridge. According to the official version, the number of those killed was 12 and of those wounded between 20 and 30. Evidence before an inquiry of the Indian National Congress put the number of the dead between 20 and 30.

Three days later, on 13 April, the traditional festival of Baisakhi, thousands of Sikhs, Muslims and Hindus gathered in the Jallianwala Bagh. An hour after the meeting began as scheduled at 16:30, Dyer arrived with a group of sixty-five Gurkha and twenty-five Baluchi soldiers. Without warning the crowd to disperse, Dyer blocked the main exits and ordered his troops to begin shooting toward the densest sections of the crowd. Firing continued for approximately ten minutes. A British inquiry into the massacre placed the death toll at 379. The Indian National Congress determined that approximately 1,000 people were killed. 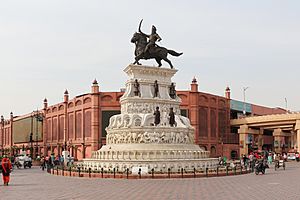 Operation Blue Star (1 – 6 June 1984) was an Indian military operation ordered by Indira Gandhi, the Prime Minister of India to curb and remove Sikh militants from the Golden Temple in Amritsar. The operation was carried out by Indian army troops with tanks and armoured vehicles. Militarily successful, the operation aroused immense controversy, and the government's justification for the timing and style of the attack are hotly debated. Operation Blue Star was included in the Top 10 Political Disgraces by India Today magazine.

Official reports put the number of deaths among the Indian army at 83, with 493 civilians and Sikh militants killed.. While independent estimates place the numbers upwards of 5,000 people, a majority of them pilgrims, including women and children. . In addition, the CBI is considered responsible for seizing historical artefacts and manuscripts in the Sikh Reference Library before burning it down.

Typically for Northwestern India, Amritsar has a hot semi-arid climate (Köppen BSh) bordering on a monsoon-influenced humid subtropical climate (Cwa) and experiences four primary seasons: winter (December to March), when temperatures can drop to −1 °C (30 °F); summer (April to June), when temperatures can reach 45 °C (113 °F); monsoon (July to September); and post-monsoon (October to November). Annual rainfall is about 703.4 millimetres (27.7 in). The lowest recorded temperature is −3.6 °C (25.5 °F), was recorded on 9 December 1996 and the highest temperature, 47.8 °C (118.0 °F), was recorded on 9 June 1995. The official weather station for the city is the civil aerodrome at Rajasansi. Weather records here date back to 15 November 1947. 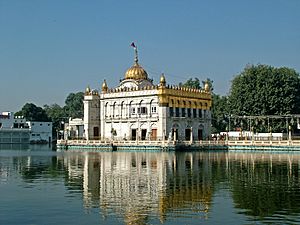 According to 2011 Census of India, Hinduism and Sikhism were the main religions of the Amritsar city at 49.4% and 48% of the population, respectively. In Amritsar city, Christianity was followed by 1.23% and Islam by 0.51%. Around 0.74% of the population of the city stated 'No Particular Religion' or another religion.

Amritsar is the holiest city in Sikhism and about 30 million people visit it each year for pilgrimage.

Amritsar is an attractive destination for tourists, especially those part of Golden Triangle. Major destinations are:

Amritsar is the second-largest city and district of Punjab. It is also one of the fastest growing cities of Punjab. In the mid 1980s the city was famous for its textile industry. After the 1984 Sikh riots Amritsar faced a blow in Industrial growth but there are still many textile mills present in the city. It is famous for its Pashmina Shawls, Woolen Clothes, Blankets, etc. Among handicrafts, the craft of the Thatheras of Jandiala Guru in Amritsar district got enlisted on UNESCO's List of Intangible Cultural Heritage in 2014, and the effort to revive this craft under the umbrella of Project Virasat is among India's biggest government-sponsored craft revival programs. 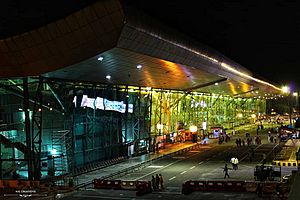 Amritsar hosts Sri Guru Ram Dass Jee International Airport. The airport is connected to other parts of India and other countries with direct international flights to cities. The Airport is 12th busiest Airport of India in terms of International Traffic. The Airport serves not only Amritsar, but also may other districts in Punjab and neighbouring states. 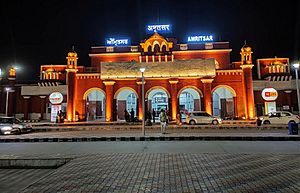 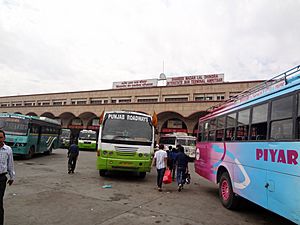 Amritsar is located on the historic Grand Trunk Road (G.T Road), also known as NH 1 now renumbered as National Highway 3. An expressway by name of Delhi-Amritsar-Katra Expressway at the cost of

25,000 crore is approved under Bharatmala scheme which will cut the travel time from Amritsar to New Delhi by road from current 8 hours, to 4 hours. Another expressway, called Amritsar Jamnagar Expressway is under construction which will connect Amritsar to Jamnagar in Rajasthan. Additionally, NH 54 (Old NH15), NH 354 and NH 503A connect Amritsar to other parts of state and rest of India. A ring road will also be built surrounding all 4 sides of Amritsar

450,000,000 is being spent to expand the Amritsar-Jalandhar stretch of G.T. Road to four lanes. In 2010, elevated road with four lanes connected to the National highway for better access to the Golden Temple has been started.

All content from Kiddle encyclopedia articles (including the article images and facts) can be freely used under Attribution-ShareAlike license, unless stated otherwise. Cite this article:
Amritsar Facts for Kids. Kiddle Encyclopedia.