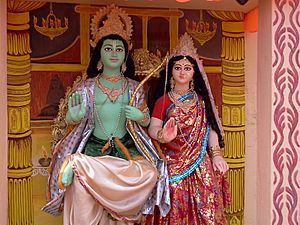 In Hinduism, Sita was the daughter of Janaka and wife of Rama, an avatar of god Vishnu. The word Sita means “furrow”, that is, the line created on the farm when it is ploughed. She is believed to be the daughter of Bhūmi in many legends.

There is a story about Sita's birth. Her father Janaka was ploughing the land and a furrow was formed. From that furrow a baby girl came out. Janaka took the girl as his daughter and named her Sita.

In Hinduism, Sita is considered a form of the goddess Lakshmi. Sita is worshiped for her greatness and for her loyalty. She was the goddess of loyalty and her responsibility.

All content from Kiddle encyclopedia articles (including the article images and facts) can be freely used under Attribution-ShareAlike license, unless stated otherwise. Cite this article:
Sita Facts for Kids. Kiddle Encyclopedia.