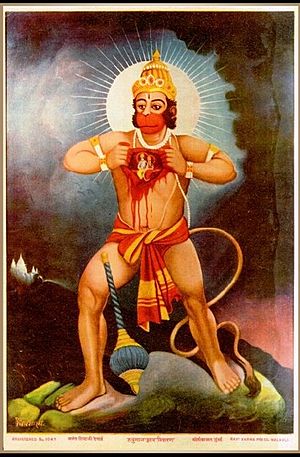 Hanuman is one of the most popular gods of Hindus. He is also known by other names like Hanumat. His mother’s name was Anjana. Based on her mother’s name, Hanuman is sometimes called Anjaneya, that is, one born of Anjana. His father’s name was Kesari. He is blessed by Vayu as the god of winds. Hanuman’s image shows him as a strong man with the face of a monkey. He also has a tail it represents the morality, higher pride of being self. Hanuman was awarded boon of Immortality by Mother Sita ( Wife of Lord rama) and is still alive

Hanuman is a very powerful and strong god. He finds an important place in the Ramayana. He was a devotee of Rama, a form (avatar) of Vishnu, a god of Hindus. Hanuman is a figure of strength, perseverance and devotion. When he was young he thought the sun a mango. One of his most famous stories was when he helped Rama rescue Sita from Ravana which is the famous story of Diwali.

All content from Kiddle encyclopedia articles (including the article images and facts) can be freely used under Attribution-ShareAlike license, unless stated otherwise. Cite this article:
Hanuman Facts for Kids. Kiddle Encyclopedia.