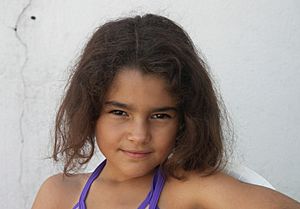 A girl from Portugal. 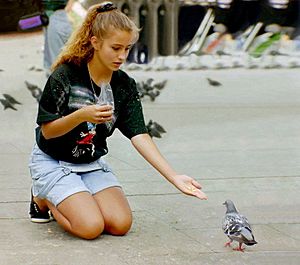 A girl feeding a piegon

A girl is a young female human, either child or adolescent. Little girls still have the body of a child. It is not until they reach puberty (perhaps around age 11 to 13) that their bodies start to mature and they become a woman. During puberty, a girl develops breasts, their hips and shoulders widen and they begin to have periods.

The word "girl" was used a long time ago by some people called Anglo Saxons. Sometimes older people still refer to grown up women as "girls", especially in expressions such as "a night out with the girls".

The opposite of a girl is a boy. A boy is a male child who will grow into a man.

The way girls are brought up will be vary a lot between different cultures. In Western cultures, a girl traditionally wears a dress or skirt. However, many girls wear trousers (pants) these days, like boys, especially when dressed informally. Girls often grow their hair longer than boys, although this can vary a lot according to quickly changing fashions.

Traditionally, girls play with dolls a lot. Boys often prefer rough games and enjoy playing with mechanical things such as toy cars and trains. People today have long discussions about whether this is because they are born like that, or because that is the way society expects them to behave.

The traditional colour for a girl is pink. For boys it is blue. When a baby is born in a hospital it usually gets a pink or blue tag on its wrist or ankle, according to whether it is a girl or a boy.

Some names are girls' names, while others are boys’ names. There are some names which can be for girls and boys (although they may be spelt differently, e.g. "Jo" for a girl and "Joe" for a boy).

In some countries such as Britain, "old girl" means a grown up who used to be a pupil at a particular school (e.g. "She is an old girl of Cransbury High School"). Used in any other way, "old girl" sounds rude (unlike "old boy" which always sounds friendly).

All content from Kiddle encyclopedia articles (including the article images and facts) can be freely used under Attribution-ShareAlike license, unless stated otherwise. Cite this article:
Girl Facts for Kids. Kiddle Encyclopedia.