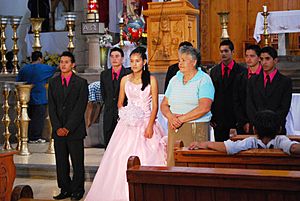 A Quinceañera after mass

The Quinceañera is a young Latina woman's celebration of her fifteenth birthday, which is celebrated in a specific and different way from her other birthdays. It is the same as the English version of a Sweet Sixteen.

The celebration begins with a Thanksgiving Mass, in which the quinceañera arrives in formal dress, accompanied by her parents, godparents, seven maids of honor and seven chamberlains. After the Mass, the younger sisters, female cousins and friends of the quinceañera pass out party favors, and the quinceañera leaves her bouquet in an altar to the Virgin Mary. The Mass is followed by a party at either the quinceañera's home or in a banquet hall rented for the occasion.

All content from Kiddle encyclopedia articles (including the article images and facts) can be freely used under Attribution-ShareAlike license, unless stated otherwise. Cite this article:
Quinceañera Facts for Kids. Kiddle Encyclopedia.