Puebla is a Mexican state located in the tip of the country, to the east of Mexico City. The state borders Veracruz to the east, Hidalgo, Mexico State, Tlaxcala, and Morelos to the west, and Guerrero and Oaxaca to the south. The state's largest cities are Puebla and Tehuacan, it has 217 municipalities.

The state of Puebla takes its name from the capital city, which was originally La Puebla de los Angeles (Town of the Angels). The formal name is Heróica Puebla de Zaragoza (Heroic Puebla of Zaragoza), after Ignacio Zaragoza who defeated the Imperial French army at the Battle of Puebla on May 5, 1862, which is commemorated as Cinco de Mayo. There is also known to the city that a lot of Aztecs lived in Puebla. 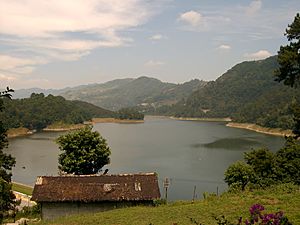 Lake and mountains in Necaxa 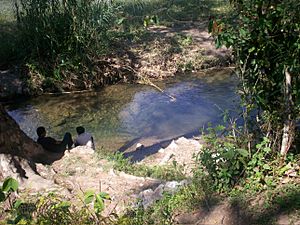 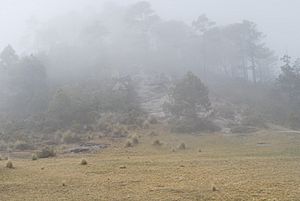 Fog in the mountains near Zacatlán

On the northeast corner of the state, the mountain chain known as the eastern Sierra Madre takes the regional name of Northern Sierra of Puebla, whereas the rest of the state is crossed by the "Transversal Volcanic System", part of a larger system known as the "Neo-Volcanic Axis". Within this rugged landscape, some peaks stand out, such as the Citlaltepetl volcano, better known as the Pico de Orizaba, the highest point in all of Mexico reaching an altitude of 5,610 meters above sea level, and which is shared with the neighboring state of Veracruz. Other major elevations in Puebla include the famous Popocatepetl volcano at 5,500 meters; the Iztaccihuatl at 5,230 meters and the Cerro La Negra.

The bodies of water supplying the state with the precious liquid include various rivers such as the Atoyac, Tilaza, Mixteco, Nexapa, Pentepec, San Marcos, Salado Cempoala, Zapoteco, Tehuacan, Ajajalpa and Nexaca rivers, the latter one forming an hydrologic basin protected by the state and listed as Natural Reserve.

The high zones of the Northern Sierra are usually covered by local species called chanchan, ojoh, and palo de agua; while the peaks of the volcanic system displays pine, oak, and oyamel forests. Moving down on to the semi-hot valleys, the landscape features several plant species of falling leaves like cuajiote, copal, and cuachalalate. The fauna found across most of the state consists of leopard, wild-boar, wolf, porcupine, badger, squirrel and rattle-snake.

Climatic conditions also respond to the different regions and their particular characteristics : the high zones of the central "Neo-Volcanic Axis" and the low lands of the state report dry or semi-dry conditions, while the valleys of the south present a hot and sub-humid climate.

The state economy of Puebla contributes with a respectable 3.7% of the national Gross Domestic Product, making it the seventh largest contributor in Mexico. The state income is distributed into the Services sector with 22.6%; manufacturing industries with 22.5%; commerce, hotels and restaurants with 22%; and financial and real-estate services with 13.7%.

Puebla stands out nationally in the production of flowers in open uncovered environments, egg, coffee, beer and beans, and still keeps the traditional and ancestral production of onyx and marble.

26% of the population lives in the state capital of Puebla de Zaragoza, and the rest is distributed across 216 municipalities, where 29% of the people live in rural settlements.

Other demographic particulars reveal that 92% of the population follows the Catholic faith; 12% speak a native language, the most common of which is Nahuatl followed by Totonac, a statistic that places Puebla as the state with the eighth highest percentage of inhabitants who speak an indigenous language of Mexico.

The state of Puebla is divided into seven regions (Huauchinango, Teziutlán, Ciudad Serdán, San Pedro Cholula, Puebla, Izúcar de Matamoros, and Tehuacán), which are in turn subdivided into municipalities (Spanish: municipios), 217 in all. Each municipality is headed by a municipal president (mayor).

All content from Kiddle encyclopedia articles (including the article images and facts) can be freely used under Attribution-ShareAlike license, unless stated otherwise. Cite this article:
Puebla Facts for Kids. Kiddle Encyclopedia.