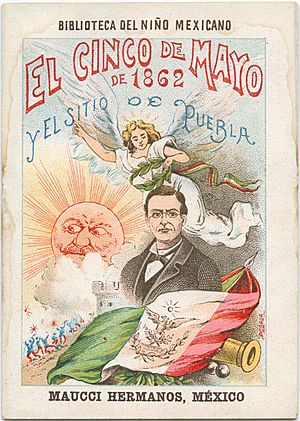 Cinco de Mayo (Spanish for "fifth of May") is a holiday celebrating Mexican heritage and pride, and is held on May 5. It is celebrated in the United States and in some parts of Mexico, mostly in the state of Puebla. Cinco de Mayo is not Mexico's Independence Day, the most important national holiday in Mexico.

In the Mexican state of Puebla, Cinco de Mayo is celebrated because the Mexican army won the Battle of Puebla from the French army on May 5, 1862. This was a surprising victory. The army was under the leadership of General Ignacio Zaragoza Seguín.

The victory represented a significant morale boost to the Mexican army and the Mexican people at large. In the description of The History Channel, "Although not a major strategic win in the overall war against the French, Zaragoza's success at Puebla represented a great symbolic victory for the Mexican government and bolstered the resistance movement." As Time magazine remarked, "The Puebla victory came to symbolize unity and pride for what seemed like a Mexican David defeating a French Goliath." It helped establish a much-needed sense of national unity and patriotism.

Historian Justo Sierra has written in his Political Evolution of the Mexican People that, had Mexico not defeated the French in Puebla on May 5, 1862, France would have gone to the aid of the Confederacy in the U.S. Civil War and the United States' destiny would have been different. 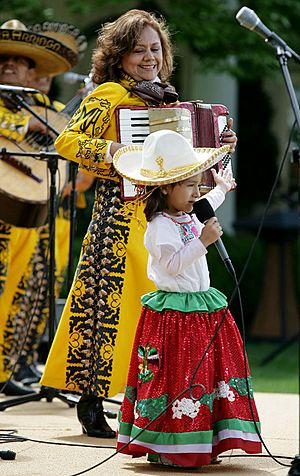 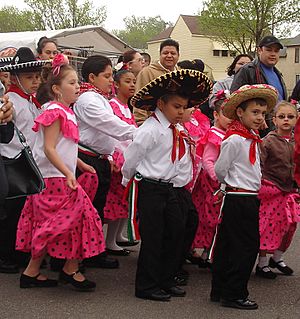 In the United States Cinco de Mayo is more important than in Mexico. It is a day to celebrate the culture and experiences of Americans of Mexican ancestry. This is in the same way as other holidays like Saint Patrick's Day, Oktoberfest, and the Chinese New Year are used to celebrate those of Irish, German, and Chinese ancestry.

Cinco de Mayo is celebrated by many Americans, not only by Americans of Mexican origin. Celebrations use both traditional Mexican symbols, like the Virgen de Guadalupe, and prominent figures with Mexican roots in the United States, including César Chávez. Many people display Cinco de Mayo banners while schools organize events to educate pupils about Mexico. 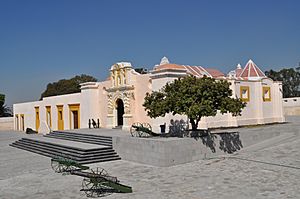 The former Forts of Guadalupe and Loreto now house a museum.

Today, the commemoration of the battle is not observed as a national holiday in Mexico (i.e. not a statutory holiday). However, all public schools are closed nationwide in Mexico on May 5. The day is an official holiday in the State of Puebla, where the Battle took place, and also a full holiday (no work) in the neighboring State of Veracruz. In Puebla, historical reenactments, parades, and meals take place to commemorate the battle. Parade participants dress as French and Mexican soldiers to reenact the battle. 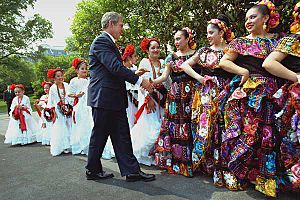 Cinco de Mayo is also celebrated outside Mexico and the United States. For example, a sky-diving club near Vancouver, Canada, holds a Cinco de Mayo skydiving event. In the Cayman Islands, in the Caribbean, there is a yearly Cinco de Mayo air guitar competition. As far away as the island of Malta, in the Mediterranean Sea, revelers are encouraged to drink Mexican beer on May 5.

All content from Kiddle encyclopedia articles (including the article images and facts) can be freely used under Attribution-ShareAlike license, unless stated otherwise. Cite this article:
Cinco de Mayo Facts for Kids. Kiddle Encyclopedia.