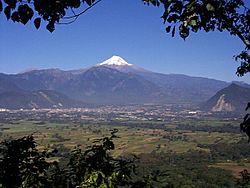 Orizaba valley, the city in the middle and the Pico de Orizaba on the horizon

Orizaba is a city and municipality in the Mexican state of Veracruz. It is 20 km west of its twin city Córdoba. It sits at the base of Pico de Orizaba, the highest peak in Mexico. It is also a volcano with a perfectly shaped snow-covered cone. The city had a 2005 census population of 117,273 and occupies almost the same area as its small municipality. The municipality includes a few small areas outside the city. It has an area of 27.97 km² (10.799 sq mi).

It was an important town during the Spanish colonization of the Americas. On January 27, 1774, the Spanish king Carlos III gave town status to Orizaba, and on November 29, 1830 Orizaba was declared a city.

All content from Kiddle encyclopedia articles (including the article images and facts) can be freely used under Attribution-ShareAlike license, unless stated otherwise. Cite this article:
Orizaba Facts for Kids. Kiddle Encyclopedia.