José María Teclo Morelos Pérez y Pavón (September 30, 1765– December 22, 1815) was a Mexican Roman Catholic priest and revolutionary rebel leader who led the Mexican War of Independence movement, assuming its leadership after the execution of Miguel Hidalgo y Costilla in 1811. Morelos and Ignacio López Rayón are credited with organizing the war of independence.

Under Morelos the Congress of Anáhuac was installed on September 13, 1813 and in November 6 of the same year congress declared the country's independence. On October 22, 1814 a constitution, Decreto Constitucional para la Libertad de la América Mexicana, was drafted by the Congress which declared that Mexico would be a Republic. 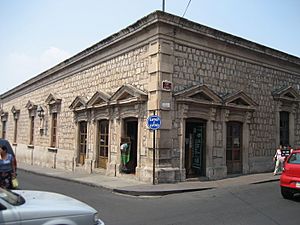 Birthplace and house of Morelos in Morelia, today a museum

Morelos was born in Valladolid, since renamed "Morelia" in his honor, to a humble family of indigenous and Spanish descent. Although Morelos was classified as an español in the baptismal register, a system in which the Catholic Church kept separate registers for different legal racial categories in the casta system of racial hierarchy, he is depicted in portraits as having a dark complexion.

Morelos may have worked a person who drives mules in the area where he fought in the insurgency, on the ground experience of the terrain that would be valuable. He is also said to have worked on a ranch by his uncle for nearly ten years.

Morelos had ambitions for something more than working with his hands, and studied hard. In 1789, he enrolled in the Colegio de San Nicolás Obispo in Valladolid. When he was ordained a priest, he, as with many others without connections, had no guarantee to any income as a priest. However, since he was a secular cleric and therefore took no vow of poverty, he could freely pursue business activities to make a living.

As a priest, he could not marry, but he did form a relationship with at least one woman, Brígida Almonte. He is known to have fathered three children. His first born was Juan Nepomuceno Almonte, who played a significant role himself in Mexican history. 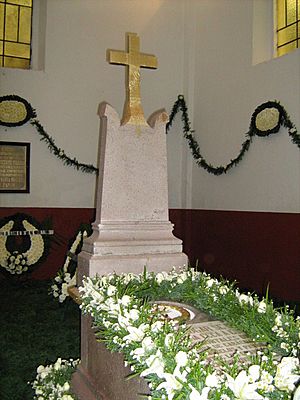 He was captured by the Spanish royalist military. He was tried and sentenced to death for treason. Morelos was executed by firing squad on December 22, 1815 in San Cristóbal Ecatepec, north of Mexico City in order that his execution not provoke a dangerous public reaction. He was later judged to be reconciled to the church, lifting his excommunication, as he was seen praying on his way to his execution.

After his death, his lieutenant, Vicente Guerrero, continued the war for independence. Morelos is a national hero in Mexico and is considered a very successful military leader despite the fact that he never took a military career and was instead a priest.

His remains were transferred to the Monument to Independence El Ángel in Mexico City, along with those of other heroes of the insurgency. 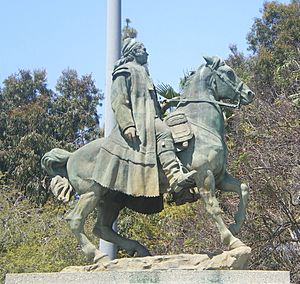 The Estadio Morelos in Morelia, Puerto Morelos in the state of Quintana Roo, the Morelos Station on the Mexico City Metro, Ecatepec the city in Mexico State where he was executed and the Morelos Satellite from the Communications company Satmex are also named after him.

All content from Kiddle encyclopedia articles (including the article images and facts) can be freely used under Attribution-ShareAlike license, unless stated otherwise. Cite this article:
José María Morelos Facts for Kids. Kiddle Encyclopedia.