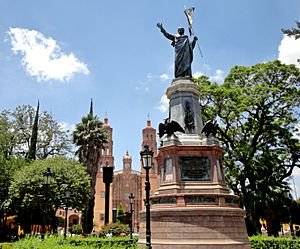 Church and the Statue of Hidalgo

Before Mexico became independent, the city was a small town known simply as Dolores. It was here that Father Miguel Hidalgo spoke his famous cry for the independence of Mexico (the Grito de Dolores). This was in the early hours of September 16, 1810, in front of his parish church. After Mexico achieved independence, the town was renamed Dolores Hidalgo in his honor. The central square of the town, in front of Father Hidalgo's historic church, is a popular tourist spot.

Today Dolores Hidalgo is known primarily for its ceramics industry. It givese work to well over half the city's population. The inexpensive and mass-produced ceramic products are sold throughout Latin America and the United States. 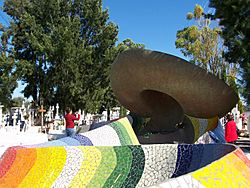 Fans of ranchera and popular music visit Dolores Hidalgo for the tomb of José Alfredo Jiménez. He was one of the country's most beloved singers and songwriters. He is buried in the town cemetery.

All content from Kiddle encyclopedia articles (including the article images and facts) can be freely used under Attribution-ShareAlike license, unless stated otherwise. Cite this article:
Dolores Hidalgo Facts for Kids. Kiddle Encyclopedia.