José Alfredo Jiménez Sandoval ( 19 January 1926 – 23 November 1973) was a Mexican singer-songwriter of rancheras, whose songs are considered the basis of modern Mexican music.

Jiménez was born in Dolores Hidalgo, Guanajuato, Mexico. According to the singer Miguel Aceves Mejía, he did not play an instrument and did not even know the Spanish word for "waltz" or what "keys" his songs were in. Nonetheless, he composed more than 1,000 songs. Among the most famous are "Yo", Me equivoqué contigo", "Ella", "Paloma querida","Que se me acabe la Vida ", "Tú y la mentira", "Media vuelta", "El Rey", "Sin sangre en las venas", "El jinete", "Si nos dejan", "Amanecí en tus brazos", "Llegando a ti", "Tu recuerdo y yo", El hijo del pueblo", "Cuando el destino", "El caballo blanco", "Llegó borracho el Borracho" and "Que te vaya bonito", as well as "Camino de Guanajuato", where he sang about his home state of Guanajuato. 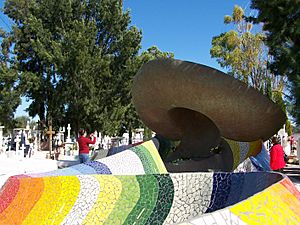 The themed José Alfredo Jiménez' tomb in Dolores Hidalgo, Guanajuato; it attracts visitors from around the world

Like many of his contemporary stars, such as Jorge Negrete, Pedro Infante, and Javier Solís, Jiménez died young. He was only forty-seven years old when he died in Mexico City, of complications resulting from cirrhosis of the liver.

One of his last appearances on Mexican television occurred in 1973, just months prior to his death, where he introduced his last song, "Gracias", accompanied by his wife, singer Alicia Juarez. It was his way of thanking the public for all of the affection they had shown him throughout his career as one of the most prolific and highly regarded composers and singers Mexico has ever produced.

In 2018, Jiménez was posthumously awarded the Latin Grammy Award for Album of the Year for ¡México Por Siempre! by Luis Miguel. Jiménez received the accolade due to the fact six of the fourteen tracks in the album were composed by him, thus making Jiménez eligible for the award.

In Mexico it has a Mausuleo popularly known as "Mausoleum of José Alfredo Jiménez".

On January 19, 2016, Google celebrated his 90th birthday with a Google Doodle. Everything Mexican begins with a Jose Alfredo Jimenez Song;Deb Leticia Gordils," Jose Alfredo Jimenez songs have lasted for nearly 5-decades, after his death, like the legacies past down thru generations so are the old ranch tunes to Mexican children in every household on the North American continent. Prolific is a descriptive word that only scratches the surface to describe the value of his music to Mexicans and Americans of Mexican descent world wide." Viva la Ranchera! 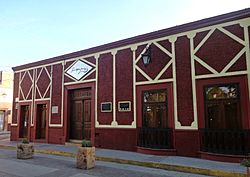 All content from Kiddle encyclopedia articles (including the article images and facts) can be freely used under Attribution-ShareAlike license, unless stated otherwise. Cite this article:
José Alfredo Jiménez Facts for Kids. Kiddle Encyclopedia.