Music of Mexico facts for kids 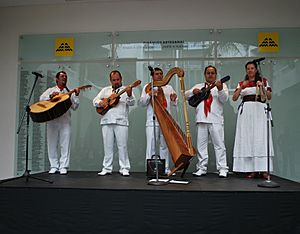 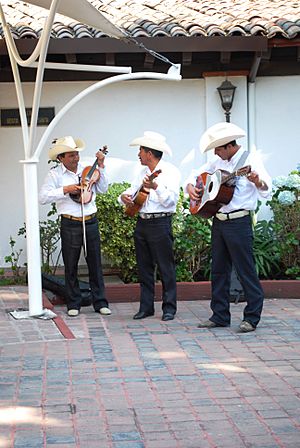 Music of Mexico has a lot of different forms of music genres that are performed by Mexican musicians. It has been influenced by a variety of cultures, most notably indigenous Mexican and European, since the Late Middle Ages.

Many traditional Mexican songs are well-known worldwide, although their origin in Mexico is not clear for example La Bamba (The Bamba).

La Cucaracha (The Cockroach), although popularized during the Mexican Revolution, is a Spanish corrido.

Mexican sones, developed from the mixture of Spanish music with indigenous music from different regions, hence the music exhibited lots of variation from differents places, both in rhythm and instrumentation.

Banda music was created with the imitation of military bands that were imported during the Second Mexican Empire, headed by emperor Maximillian I of Mexico in the 1860s.

Polish immigrants established themselves in the state of Sinaloa. It was further popularized during the Mexican Revolution when local authorities and states formed their own bands to play in the town squares.

Revolutionary leaders such as Pancho Villa, also took wind bands with them wherever they went.

Banda has to this day remained popular throughout the central and northern states.

Today people associate banda with Sinaloense. This originated in the 1940s when the media distributed Banda el Recodo repertoire as exclusively from Sinaloa when it was actually regional music from all over Mexico.

Although banda music is played by many bands from different parts of Mexico, its original roots are in Sinaloa, which is hugely famous for bands such as Banda el Recodo from Sinaloa. 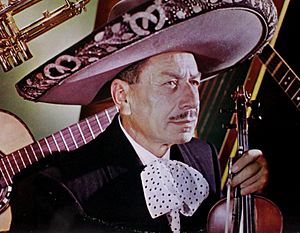 The Mariachi-style of music originated in the state of Jalisco, particularly in the city of Cocula, near Guadalajara, as well as surrounding states of western Mexico.

Mariachi is now popular throughout Mexico and the Southwest United States, and is considered representative of Mexican music and culture.

This style of music is played by a group consisting of five or more musicians that wear charro suits.

The traditional mariachi band was made up of at least two violins, a guitar, a guitarrón (large bass guitar) and a vihuela (similar to a guitar but with a round back tha plays at a higher pitch than the traditional guitar). Nowadays mariachi bands also usually include trumpets, and sometimes a harp.

Another important music style is musica Norteña, or northern style tunes, which has been the basis for such sub-genres as musica de banda. Influenced by both Bohemian music and immigrant miners, its rhythm was derived from European polkas, which were popular during the 1800s.

Rumba came from the black Mexican enslaved people in Veracruz, Mexico city, and Yucatán. The style began in Cuba and later became famous in the black community of Mexico.

From the beginning of the 20th century, bolero arrived to Yucatán, and Danzón to Veracruz. Both styles became very popular all over the country, and a Mexican style of both rhythms was developed.

In the 40s the Cubans Perez Prado, Benny More emigrated to Mexico, they brought with them the mambo, which became extremely popular especially in Mexico City, later on mambo developed into Cha cha cha which was also very popular.

The history of Cumbia in Mexico is almost as old as Cumbia in Colombia. In the 1940s Colombian singer Luis Carlos Meyer Castandet, emigrated to Mexico. In the 50s he recorded what many people think was the first cumbia recorded outside of Colombia, La Cumbia Cienaguera. This is when Cumbia began to be popularized in Mexico.

Today Cumbia is played in many different ways, and has slight variations depending on the geographical area like Cumbia andina mexicana, Cumbia Norteña, Tecno-cumbia. 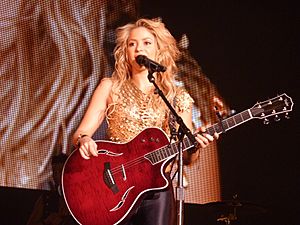 Shakira on her tour Sale el Sol World Tour in 2010.

The Mexican music market serves as a launching pad to stardom for a lot of non-Mexican artists who are interested extending the market-range of their music. Such was the case with Julio Iglesias, Enrique Iglesias, Shakira, Chayanne, Alejandro Sanz, Allison, Aventura, Juanes, Mecano, Motel, Sonica, Daddy Yankee, J. King & Maximan, Wisin & Yandel, and Ricky Martin, among many others. According to the America Top 100, Mexico had over 90 hits in Latin America during 2006, almost a third more than its closest competitor, the United States.

The Mexican rock movement began in the late 1950s and early 1960s, rapidly becoming popular, and peaking in the 80s and 90s with real authentic sounds and styles. One of the early Mexican Rock bands came out of the East Los Angeles Area, "Los Nómadas." (The Nomads) They were one of the first racially-integrated bands of the 50s, consisting of 3 Latino Boys, Chico Vasquez, J.D. Moreno, Abel Padilla, and a Caucasian boy Bill Aken.

Mexican Rock combined the traditional instruments and stories of Mexico in its songs. Mexican along with Latin American Rock remain very popular in Mexico, surpassing other cultural interpretations of Rock and Roll.

Mexico has a long tradition of classical music, as far back as the 16th century, when it was a Spanish colony. Music of New Spain, especially that of Juan Gutiérrez de Padilla and Hernando Franco, is increasingly recognized as a significant contribution to New World culture. 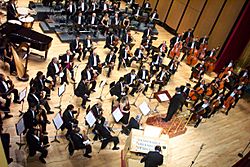 In the 19th century the waltzes of Juventino Rosas achieved world recognition. Manuel M. Ponce is recognized as an important composer for the Spanish classical guitar, responsible for widening the repertoire for this instrument.

In the 20th century, Carlos Chavez, is a notable composer who wrote symphonies, ballets, and a wide catalog of chamber music, within varied esthetic orientations.

All content from Kiddle encyclopedia articles (including the article images and facts) can be freely used under Attribution-ShareAlike license, unless stated otherwise. Cite this article:
Music of Mexico Facts for Kids. Kiddle Encyclopedia.